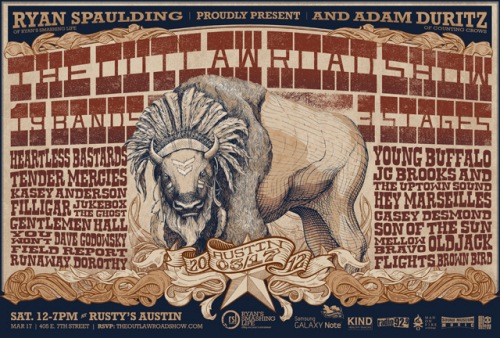 AUSTIN, TX (March 12, 2012): Austin's own Heartless Bastards will be headlining THE OUTLAW ROADSHOW this Saturday March 17 in Austin.
Springing from the minds of music blogger Ryan Spaulding of Ryan's Smashing Life (rslblog.com) and Adam Duritz of Counting Crows, THE OUTLAW ROADSHOW is an thrill ride for the music fan: 3 stages featuring 19 bright emerging bands who deserve some time in your headphones in 2012, all hand-picked by Ryan and Adam after a blizzard of pinballing mp3 email exchanges and exuberant phone calls ("Seriously dude, you have GOT to check out...").
Duritz and Spaulding first met in 2008. "Ryan's Smashing Life was my favorite music blog" says Duritz, "I wanted to do interviews with great blogs for our last record - not just big print publications - so I called him up. That's how we met." The two became fast friends, inseparable geeks and true believers in the future of indie music. They wanted to help young bands and, in THE OUTLAW ROADSHOW, Adam and Ryan created an event where music fans come for the show, stay for the music, and leave with the echoes of new favorite bands ringing in their ears. THE OUTLAW ROADSHOW runs from noon to 7 pm at Rusty’s Austin (405 E. 7th Street). RSVP Today.
The last band added to our St. Patrick's Day Lineup! 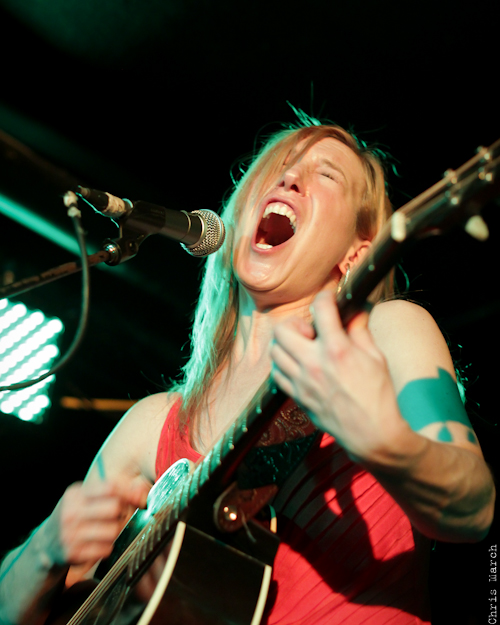 In addition to Heartless Bastards, this year's ROADSHOW lineup includes Young Buffalo, Kasey Anderson & The Honkies, Tender Mercies, Gentlemen Hall, Hey Marseilles, Son of the Sun, Jukebox The Ghost, OldJack, Dave Godowsky, Mellow Bravo, Field Report, Filligar, Brown Bird, Casey Desmond, Flights, You Won't , JC Brooks & The Uptown Sound and Runaway Dorothy.
There are free downloads of tracks from 19 bands at the ROADSHOW's website (www.theoutlawroadshow.com), including an exclusive track ("Like Teenage Gravity") from Counting Crows' forthcoming album UNDERWATER SUNSHINE (or What We Did On Our Summer Vacation), due out April 10th on Tyrannosaurus Records/Collective Sounds.
UNDERWATER SUNSHINE is inspired by Counting Crows' deep respect for the songcraft of other artists and is comprised of more than a dozen of the Crows' interpretations of songs by new talents (such as The Romany Rye, Kasey Anderson, Dawes, Tender Mercies and Coby Brown) as well as better known artists from years past (such as Big Star, Travis, Fairport Convention, Gram Parsons, Teenage Fanclub and The Faces).
Counting Crows will also be performing live for a Daytrotter session this Thurs March 15 in Austin at 5 pm and headlining Auditorium Shores at SXSW with Diamond Rugs and Tender Mercies this Fri March 16.
In addition, the Crows are touring America with 2011 Outlaw Roadshow veterans Mean Creek in April and May. Please visit www.countingcrows.com for dates and details.
www.theoutlawroadshow.com
www.rslblog.com
www.countingcrows.com
www.underwatersunshine.com

Await Rescue said…
Hope RSL is killing it down at SXSW!

Good luck with The Outlaw Roadshow on Saturday!

You're definitely giving the people a killer show.