Rising from the dust of the pre-pandemic world, the debut record from Last Chance (Brooklyn, NY) has dropped and is proving to be one of my guilty listening pleasures this year.  A guitar garage classic out of the gates, this bold little record gets set on repeat regularly and rolls on cleaning days and long drives into the office. Curious to find out more, I reached out to Dave Baron, guitarist/songwriter/producer for Last Chance in an attempt to learn more about the record and the band.  Baron, formally of the celebrated rock band Feints, is someone I was excited to hear making records again. His trademark riffs and guitar arrangements are one of the reasons why the red-hot Feints burned so bright. 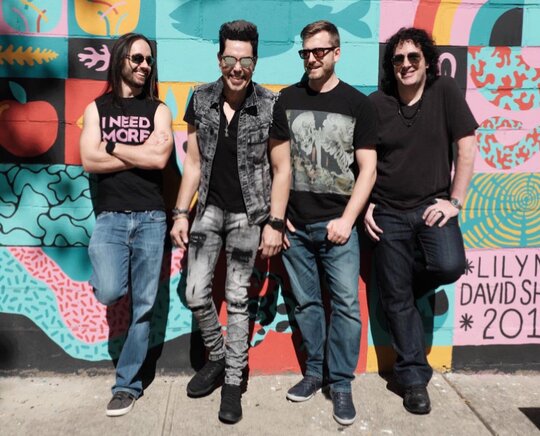 Last Chance is Jordan Cannata, Frankie Rage, Rob Phillips and Dave Baron.
RYAN (RSL): “Dave – congratulations on Last Chance! And thanks for making time for an interview about the new album. I have this idea of you knocking around the house unable to sit still. Eventually songs with big guitar solo epiphanies exploded out! How right am I?”

DAVE BARON: "Thank you! I’m glad to hear you’re enjoying the album. As far as not being able to sit still, I actually did sit still (musically) for quite a while after Feints went on permanent hiatus in 2015. That band was a hard act to follow. It was the bombastic, no-limits, BIG ROCK band of my dreams. When we stopped, it was very hard for me to figure out what to do next musically. It was no sure thing that I’d ever do any music project or recording again. What I did mostly after Feints was practice – trying to improve my guitar game and musicianship. And while doing that is rewarding on a personal level, without any practical application of playing live or recording, it’s all rather academic. I felt like: OK, I’m a bit better now. So what? When I moved from Boston to Brooklyn, I started looking for new musical possibilities. I went to some jams. I auditioned for some bands, but nothing felt right."
Baron posted a guitarist-available ad online which resulted in Last Chance singer Frankie Rage knocking on his door. It was the beginning of great things.
"Frankie’s an original, NYC punk rock guy, and I’m a heavy rock/metal guy, but once we started talking, we clicked immediately, both musically and personally. And though I knew the music we’d create together would be quite different from Feints, it was still very much riffy rock – something I felt could sink my teeth into, that could be really special, and very cool.
Guitar Ace Dave Baron 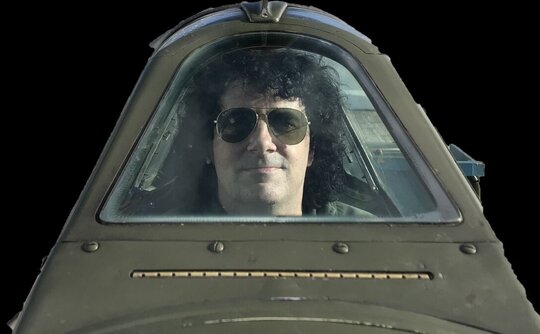 "Guitar solos are always going to be a part of how I express myself in any music I make. I enjoy creating that song-within-a-song aspect in my music."

RSL: “Last Chance also features your Feints bandmate Rob Phillips. And the two of you are credited with its Production and Mastering. What has it been like working with Rob again? How different was the creativity process for you this time around?”


DAVE BARON: "Rob is my musical brother, and I have enormous respect for him. We have a great musical rapport, both as players and as producers. We produced all of the Feints music together, and I told Frankie from the jump that we should bring Rob in to co-produce the Last Chance album. Frankie loved the Feints stuff, so bringing in Rob to co-produce wasn’t a hard sell.
Phillips & Baron celebrate in studio

I would have brought Rob in on bass originally, too, but when we first started, Frankie said, “I already have the bassist – a guy I’ve known for years.” Long story, short: Frankie’s bassist didn’t work out, and neither did a half a dozen drummers – for very common, lunkhead-musician reasons. But when all of that imploded, I said to Frankie, “Look, let’s just bring Rob in on bass (as well as production). He’s a great musician who plays bass, keys, guitar, and produces. He’ll be our John Paul Jones. There won’t be any drama because he and I already work really well together, and you’ll like him, too.” Again. It didn’t take much to sell Frankie on Rob. The evidence of Rob’s bass prowess was also all over the Feints tracks.

"As far as the creative process goes, it was very familiar territory working with Rob, but I have to say, in the time between Feints and Last Chance, Rob – who’s a good deal younger than both Frankie and I – matured a lot. In the past, Rob was less willing to push himself, but we did a lot of marathon production sessions (sometimes 12 hours) to finish the Last Chance album. He would have balked at that in the Feints days. He definitely stepped it up. And I think that one of the reasons why we work well together is that as producers, I tend to lean bold. That old, I want everything louder than everything else. Whereas Rob tends to lean conservative. So when we meet somewhere in the middle, it’s usually the right balance. And when Rob’s on bass, he’s competing with my guitars which are always a roaring T-Rex, and Jordan who’s a fucking monster on drums. We needed Rob to embrace his inner rock star and vie for equal attention, on bass as well. He stepped up there, too."

RSL: “I cannot help but notice that buried amidst the fury of drums and guitar ‘Last Chance’ the album has some songs with darker meaning. Was that intentional or incidental? How close is this album and its pieces from your original concept?”


DAVE BARON: "Yeah. It’s a dark album, no doubt. "Anything but That" is a very literal song about the pain of losing my father – horribly – to Alzheimers in 2021. It doesn’t get much darker than that. The album was largely written under COVID lockdown. A dark time for everyone, and certainly for me. Conceptually, we really didn’t set out to do anything specific – dark or otherwise. Frankie had some rough song ideas demoed that pre-dated our working together (Gotcha Back, Tattoo, Human Eyes, Kamikaze). We hammered those ideas into fully-fledged songs. As those songs solidified, we usually had to re-work the lyrics to fit the new arrangements. But on Frankie’s ideas, we tried to retain at least some of the original lyrical concepts. So, for example, Kamikaze started off being about self-destructive behavior, but it ended up being more."


RSL: “Can you walk us through Kamikaze? Was the creative process for the song?”


DAVE BARON: "Kamikaze was a Frankie idea that was originally just a series of ideas wrapped into one demo. It had like four bridges (I think they were bridges). Anyway, lots of extra parts that didn’t fit the song. What you hear in our version strips out all the excess and uses just the best bits, re-arranged. And it was a difficult song to piece together. Frankie and I reworked the lyrics to the new arrangement together. It started off being about one guy’s self-destructive behavior, but soon, I found myself wanting to inject the duality of the Japanese Kamikaze pilot experience into the lyrics, and then into the sound. Frankie and I are both into WWII history, and it seemed like a cool idea. IMO, the duality works. For example, Big flaming Zero, could be a self-deprecating euphemism (as in, I’m a zero of a human being). Or it could be the duality of slamming an aircraft into a ship. I also knew I could work the sonics of that topic into the song in a fun way.


"There were times Frankie was unsure whether we should pursue Kamikaze, but the chorus was so damn catchy, I knew we had something. So I kept saying, “yeah, it’s going to work, and it’s going to be great,” I just didn’t know how it would work until later.


"Kamikaze didn’t really come together until Jordan laid down his AMAZING drum groove for the song. Once he cut the drums, I got super excited about Kamikaze, and I knew that it was going to be epic! Once we had those drums, I knew what to do on the guitars, and more importantly, it gave Rob a direction for that totally sick bass part he came up with! The ending of the song is my recreation of a 1940s south Pacific carrier battle on guitar. Very fun! Great closer for the album.
LINK: LAST CHANCE