INTERGALACTIC POP - Having appeared on last season of NBC's "The Voice," Boston's Casey Desmond is the proud owner of dozens of songwriting awards and has recently enjoyed a string of successes; her work has been picked up by several television programs - she is clearly a player on the rise in the music world. Casey's unique style and music combine her soaring vocal melodies, synth-driven electro dance rhythms & socially conscious lyrics with a retro yet ahead-of-the-curve fashion sense that keeps today's tastemakers wanting more, landing her coverage in The Examiner, Star and Keyboard Magazine. Elements of her song and art have seen her compared to electro-pop icons like David Bowie, Cyndi Lauper, Blondie, and today's dance pop divas like Lady Gaga and Katy Perry. 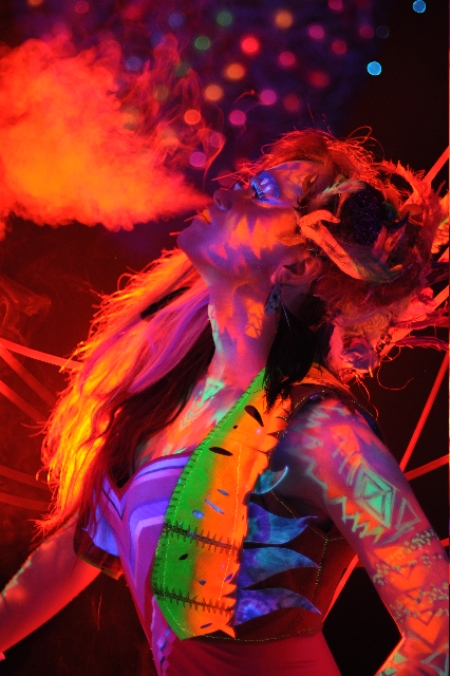 Casey Desmond - Rendezvous
ONE OF A KIND - Raised on an organic farm and in her parent's recording studio, she lives amongst a rare collection of vintage synths, keyboards, guitars and state of the art recording gear with a living room as a rehearsal space for her band. No one can deny that Casey's world is making music — but her artistry doesn't stop there. Drawing from her education in Illustration and Fashion Design (AIB-Lesley), Casey incorporates one-of-a-kind style and dramatic flair into her always colorful handmade stage costumes. She has her own fashion line OHDEERGOD.
If this doesn't sound like anyone you have ever met, that's because it's absolutely true. There really isn't anybody out there like Casey; she's one of a kind. Her talent and singular stage presence made her a natural choice to be added to this year's showcase in Austin. She'll provides our crowd with a fresh look at what electro-pop can be in 2012 . This St. Patrick's Day, Casey joins a lineup of 19 of America's finest music acts - catch The Outlaw Roadshow. The show is free but limited to legal capacity. RSVP: Be there!