Memories from The Outlaw Roadshow - Leg One 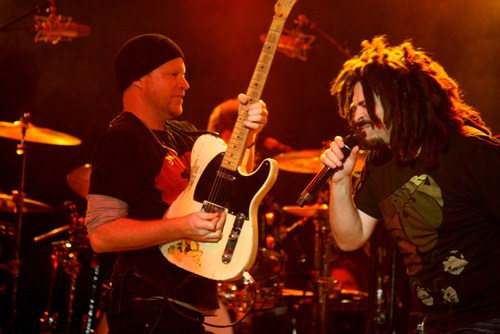 The Outlaw Roadshow rolled into the Ives Concert Park in Danbury, CT on a rainy night Tuesday to kick off the venue’s summer concert series. And the steady rain did nothing to dampen the joyful mood in the packed audience or with the four bands lined up to play.

Good Old War started things up off with a solid set. The Indie trio out of Pennsylvania played tunes from their three full-length albums including new songs from their current release, “Come Back as Rain” (appropriately titled for the evening). 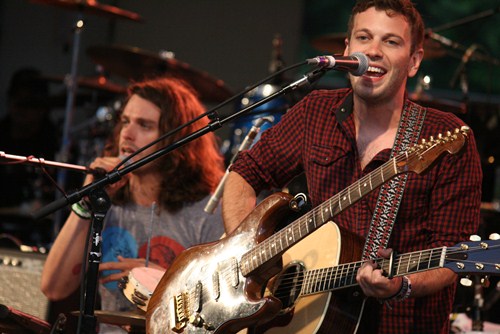 As the venue continued to fill up despite the rain, MC Adam Duritz, introduced our second band of the evening, Filligar. The band, consisting of three brothers and a childhood friend from Chicago, played a rocking set of songs including tunes from their Indie Music Award nominated album, “The Nerve.” 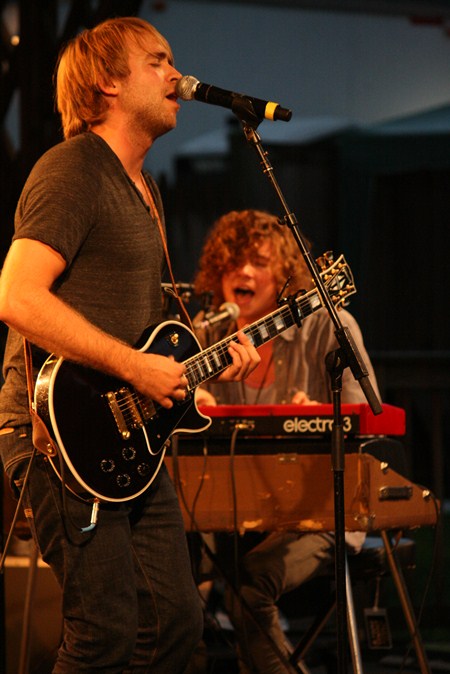 Third up in line, Wisconsin’s Foreign Fields rounded out the warm up to Counting Crows. This impressive electronic folk group put forth beautiful harmonies from their album, “Anywhere But Where I Am”. (Side note to that: I picked up a hand-packaged version of their CD - #165 – that includes some really cool snap shots of TN and spots associated with recording the CD. You can get one in a pretty jewel case, but this one is way cooler…)
Having acquired a fun yellow poncho previously, I strolled about the field to check out the crowd and the vendors before Counting Crows made the stage. At the merch table, I scored big with new CD’s from each band and some lovely vinyl from Good Old War while chatting with members of each of the first three bands.

House lights down and the strains of Bill Withers’ “Lean on Me” herald the arrival on stage of the main event, Counting Crows. As the band takes their places, Adam Duritz greets each member with a handshake…and they begin with a very appropo dressed down/slowed down version of “Rain King”.

After handily performing several songs including “Mrs. Potter’s Lullaby”, front man, Adam D., greeted the drenched audience. “I can’t see you. Raise your hand if you hear your name. Bob? Betsy? Thanks for coming out in the rain tonight.” Then he went on to comment about the “moat” in front of the stage (Ives stage is under a pavilion surrounded by a pond in front and fountains behind). “While I was watching the other bands, I thought ‘Cool. I have my own moat to perform in front of.’ Now that I look into it (as he leans way into it), it looks like a black pool of tar.”

Adam and the boys continued to move through their amazing catalog of music with the polish of a band of their stature including a kick ass beautiful “Anna Begins” (with the amazing Dave Immergluck picking up the mandolin for this one), “Miami”, and “Mrs. Jones” along with songs from their new release, “Underwater Sunshine (Or What We Did On Our Summer Vacation).

They capped off the night with an encore that included the crowd sing-a-long song, “Hangin’ Around”. The fans were completely soaked at this point, but it just didn’t matter. They danced and sang gleefully. And I stood and watched and smiled as I looked up and let the rain drops cover my face. Yes. It rained. But the four awesome bands that came together as The Outlaw Roadshow made it all right. 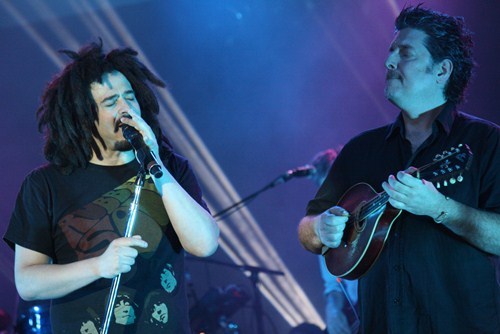