On Further Review
One To Watch in '13 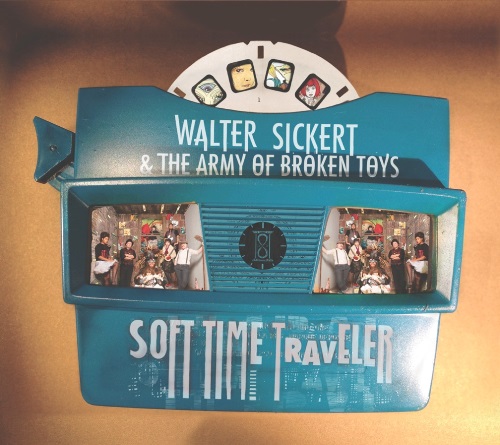 NEW! Devils In The Details NEW!

BEST OF 2013 ALBUM SELECTION - This website and everything and all our efforts to promote and indicate have ultimately been made to cheer on the over-achieving underdogs out there. And, of course, to share unexamined greatness. It's most rewarding, really perfect I mean, when both of those elements come together at the same time. For years now, the eccentric and gifted Walter Sickert has drawn like-minded souls (artistic folks on the outskirts, friends with vision who too-often going unseen) and has helped found a community of supporters and friends to celebrate music and life together. I saw Sickert and The Army of Broken Toys for the first time some three to four years ago and two thoughts remained with me: this is a really odd frenzied live show - and it immediately occurred to me that the group were really quite damn good at playing music.

And as the world whirled and twirled on its axis, The Broken Toys were ceaseless in their creative production. Quietly, this multi-disciplined talent flourished under each other's watch, growing as a family.. The art has been stunning - and it's all capped off with the new double record, "Soft Time Traveler" (April 16 Global release, but Tonight in the band's hometown Boston). This massive undertaking (18 songs that spring off the page) is easily one of the best albums I have heard so far in 2013. It's a gorgeous, rustic homemade stew with local grown vegetables and wild goat. (Just listen and you'll see what I mean.)


Walter Sickert is an eccentric, sure, but his work is genius.

Soft Time Traveler was produced and engineered by Joel Simches. (Assistant Engineer Randall Billian.) It was recorded at Watch City Studios in Waltham, MA, where Walter and the rest of the Broken Toys found a homey collection of odd antiques including a functioning wax cylinder player and vintage Victorian embalming paraphernalia. The music matches. Here Sickert and company leap and skip effortlessly from genre to genre, jumping through time. They invoke Tom Waits with "Devil's In The Details," worshiping at a gypsy church with Gogol Bordello on "Survive Songbird" and dancing a melodic, stringed waltz with Devotcha throughout (Nick Urata's Devotchka are actually referenced in song on the record) and I love Droog and Devotchka which reminds me (amazingly) of The Smiths and Belle and Sebastian. All chances taken here are rewarded. A winning breakout for this wild bunch!

Soft Time Traveler is the culmination of the last few years of work for this band. And the record exceeds all expectations. This is the Sickert and his band at the very best. In June, The Army of Broken Toys will play NXNE 2013 in Toronto exposing their trademark sound to thousands of new fans.

The Army of Broken Toys
photos by Caleb Cole

Adam said…
This review is dead-on. The are a great live band (I've seen them a number of times) and the album, Soft Time Traveler, is amazing. I got an advanced copy via the kickstarter and I've been listening to it incessantly since.
28.3.13