What you're about to see is one of the key moments of The Outlaw Roadshow 2014. Hosted at The Bowery Electric in lower Manhattan and seen by hundreds live, Counting Crows took the stage and played divinely. At the end of the set, Adam called up Austin singer-songwriter Nakia to play keys. The two had secretly discussed a collaboration and this was it..

In attendance, having played earlier in The Outlaw, was K Phillips. Phillips had been asked to come to the front of the room to catch Nakia's big moment with the Crows. Nakia, a lifelong Counting Crows fan, was playing with the musicians he loved - but he was covering the K Phillips song, "Kat's Song" (original version here.)


I was standing within arm's reach of K in the crowd and saw the realization of the moment appear on his face. And as the realization that the climax of the show was a cover of his original song.. tears began to flow. And not just K... Pretty much everyone in the audience who had ever heard K Phillips sing, who understand that he had traveled from Texas for this ... anyone who understand the sacrifices that need to be made to follow dreams... hell, most of us were crying. Half-way through the video, Adam calls the stunned K up on stage to sing along. 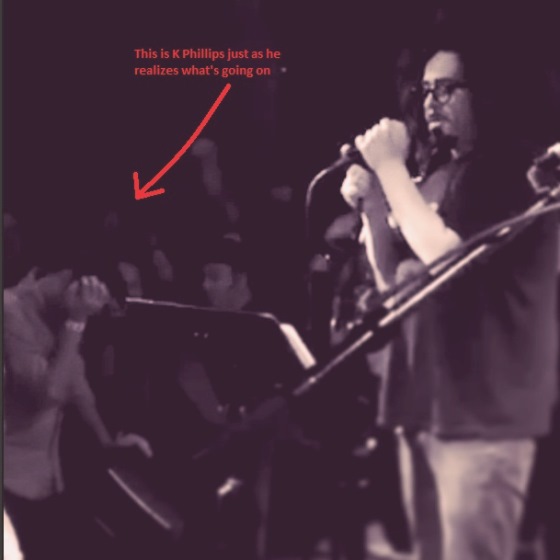 And near the end, members of the bands Tallahassee, Golden Bloom, Nate Leavitt and Matt Sucich (each had already played and stuck around) joined them all on stage. It's hard to describe a moment in which everyone wins - including the audience, but this was it. And to put it all in perspective, after this super-small and intense set in NY, the Crows next performance was in England on Later.. with Jools Holland - a BBC show viewed by millions.

Anonymous said…
Check out the SBG YouTube channel as well as the One On One YouTube Channel ... I became friends with Ehud waiting on line for a NYC GA Counting Crows show and have been filming shows with him over 12 years now. Been turned on to some truly great music in the process .. the content on these channels is top notch ..Check it out, but more importantly share it with your friends! Catapultcc
31.10.14