Our Writers discuss MAN OF STEEL

Thoughts on Films
by Max Bowen
and Ryan Spaulding 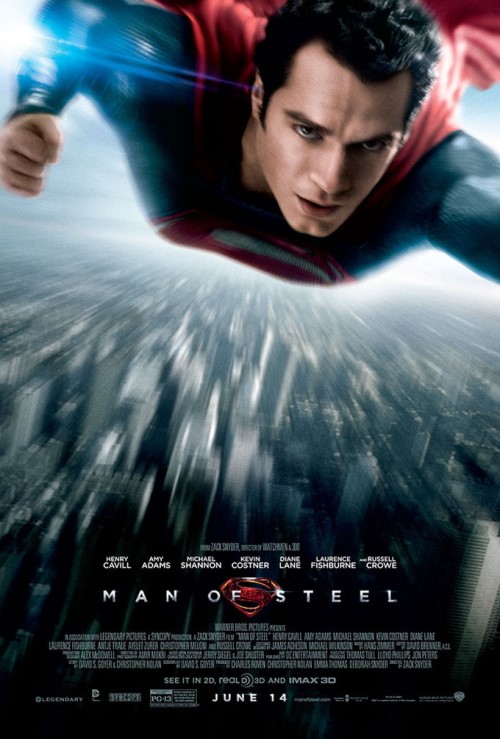 MAX:  Since the first trailer was posted last December, all eyes have been on this latest edition to the Superman film franchise, particularly since the skull-crushingly boring Superman Returns in 2006. We all had high hopes for this film, which pits Superman/Clark Kent (Henry Cavill) against General Zod (Michael Shannon) and his army—fellow Kryptonians who are totally cool with sanitizing Earth to bring back Krypton. The big question is, with all the hype and hope, did it leap over the tall buildings of fans’ expectations? Well….yes and no.

RYAN:  Letting the internet know we disagree almost from the beginning. Right off the bat, you're talking about expectations and I wonder if that colored your vision on the entire project. For me, any Superman story that doesn't spend half it's existence in a quite familiar Kansas community, watching a gawky Clark Kent make his way through junior high is a winner. Let's go ahead and break it down. 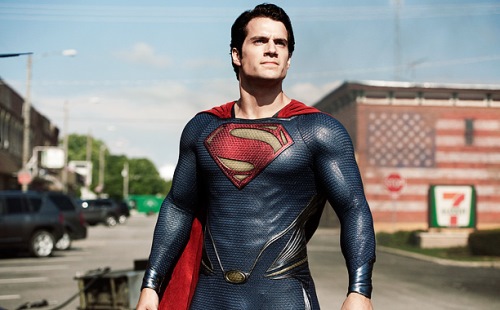 MAX:  Let’s start with the positive side. This movie has some incredible action scenes, such as Superman’s badass birth father (Russell Crowe) who is Krypton’s leading scientist Jor El. Then there's Superman...With super-speed, unlimited strength and heat vision, fight scenes take on a whole new level of awesomeness, and I loved every minute of it. The special effects were another high point of Man of Steel. This movie was a great example of how current technology can open new possibilities for filmmakers, and while I can already hear the whine of film snobs as they lambaste the endless revamps, this movie does stand on its own, even if a green screen is needed to do it.

RYAN:  This was Russell Crowe's best role in years, but I am wondering if he has to always play the elder statesman / former warrior now. It will be interesting to see where he goes next. It's hard for me to say that he upstaged Marlon Brando (see the 1978 Superman original film) so I won't. Richard Donner directed that movie for Brando's scene in the beginning to be intensely short but important, whereas MAN OF STEEL director Zack Snyder split the first half of the movie into two parts: on Earth and on Krypton. It was a daring and highly successful decision, one which lengthened Crowe's part so where he can be discussed in the same terms as Brando. We are left wondering if Brando would have over-shadowed the entire film had he been afforded the same time on film in SUPERMAN. 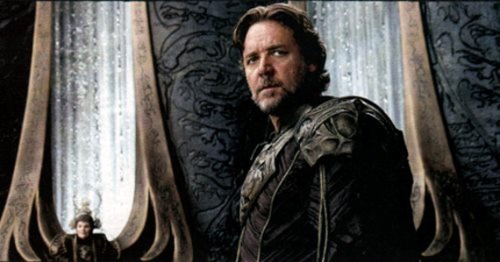 All I can say is thank god Zack Snyder didn't spoon-feed us the same origin story once again. The fact Snyder only shares glimpses of Superman's early deeds -- all the while developing strong supporting characters, was brilliant. I loved Diane Lane and Kevin Costner as Ma & Pa Kent. There's a scene in which you sort of get weepy as Costner comforts a young Clark Kent, and he reassures his alien son that he does indeed belong to them - and the Earth as well.

To look at these well-developed, rich characters as mere props in the story would be a mistake.

MAX:   Russell Crowe and Kevin Costner take on the roles of Clark’s parents, Jor El and Jonathan Kent, and neither one is worth a good goddamn. Crowe spends the movie talking in philosophical platitudes about hope and empowering others to greatness, while Costner’s cool with his son letting countless others die in order to preserve his secret. Say, Dad, just when is it okay to start helping people?

RYAN:  You are one of those people that always wants to get to the good parts don't you?! There are many lessons in life that don't make sense to you when you are told. And ultimately, isn't it more realistic - and better drama - that Jonathan Kent passed on all his strengths but also a few of his fears and weaknesses to his son? Isn't that closer to true story development and closer to what would happen in real life? 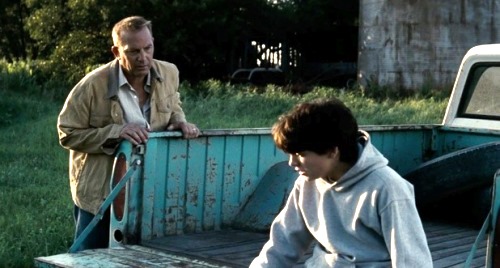 MAX: Let's talk about special effects. I loved the fight scenes. But not all the great effects involve skyscrapers imploding. One scene shows Superman about to take off for the first time. His fist is against the ground, and we see the rocks and dirt flow away from him as he prepares for takeoff. It’s this attention to detail that makes a difference.

RYAN: I agree. There was widespread destruction, perhaps a little more than necessary (see The Avengers - a movie that set a new bar on superheroes destroying cities they are supposed to be saving) but the fight pacing was notable in that it was digestible. An example of movies that do this very poorly are the films in the Transformers franchise. It's like the special effects wizards drink three energy drinks before sitting down to map out these scenes. The editing is then done to remove frames and the scenes look choppy and wired. In MAN OF STEEL, there was a crazy amount of destruction but it appears to have been presented in such a way it can be followed.

MAX: Let's talk about Superman. Cavill portrays a reserved Superman, and I think this makes a lot of sense. We have a character who can sneeze his way through an army and he’s fully aware of it, but he just wants to help people. This is a man who is constant struggling to keep his powers under control. Seriously, it must be a nightmare when one high-five can leave your buddy with a bloody stump. But Superman is a character that is profoundly alone. From his childhood, Clark knows what he is and what this means—he doesn’t get to have a normal life, no matter what he does.

RYAN:  I could actually give or take Cavill. He fulfills the role and didn't go over the top. I just think that it's such a whitebread character that I really enjoyed that he wasn't asked to ham it up. Again, I think Snyder was brilliant in focusing away from the Superman character throughout. Let's talk villains now.. 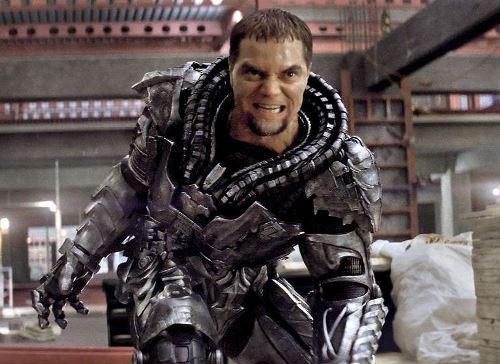 MAX:  Shannon is a great villain. While it’s clear he’s motivated by power and a thirst to rule, there seems to be an underlying desire to make the best world for his people. Granted, that often means piling up the corpses a mile high, but we all remember how to make an omelette.

RYAN:  Well it's pretty clear that a lot of thought was put into the rationale of the character. I think it's pretty brilliant on how the film shows General Zod to be a idealized terrorist in a way, one who exhibits endless loyalty to his people and a dead world. To me, this is the winning piece of the film. It's tied directly to the film's story development on Krypton and through the forbidden zone. Actor Shannon does a great job, but it's the script here that's the real champion. The villains are made more interesting not just for their darkness but for their depth of color.

MAX:  As much as I give director Zach Snyder a thumbs-up for his stewardship of this movie, there are times I really wished he would run afoul of a gang of velociraptors. The pacing of the first half of this movie was so scattershot, it was like he dropped the script into a blender and smeared the results onto the storyboard.

RYAN:  I don't know man. I guess that's the dividing line. I really loved the first half and found the second half, while predictable - to be enjoyable for special effects. The movie, for me, was made in the first half.

MAX:  Let's talk supporting characters. Amy Adams gives us a Lois Lane that pisses me off at times. During one of her first meetings with Superman, she belittles his heritage. He points out that the S on his costume is actually a symbol, to which she responds, “well here, it’s an S.” Sorry Lane, I’m going agree with the guy that could reach down my throat and pull my ass out so he could kick it across three time zones. For the most part, she’s there simply to give Superman someone to save, and if I were him, I wouldn’t bother.

RYAN:  I'm not a huge Amy Adams fans, nor am I a big fan of the familiar film version of Lois Lane played by Margot Kidder. I feel that she was a human character and a little complex due to her professional assertiveness. No strong feelings either way, but since I'm historically not fond of the character (written years ago to ground Superman and give him a love interest) then I would say Adams did a pretty decent job.

MAX:  Taking all this elements together, I have to say Man of Steel is a decent, if a tad hollow, entry into the Superman canon. Much like Superman when he first learned to fly, the movie falls at some points, and soars at others. Grade:  C+  Hey, at least it’s not another Green Lantern.

RYAN:  This is about as good of a reboot for a superhero film that you will see. Noting that we did see a "Lexcorp" truck get over-turned in one of the end fights in the film, I am really skeptical about where this franchise can go. Superman remains a difficult character. And any future films won't be able to squeeze out the strengths of this one: namely the repainting of the origin story on Krypton and the development of the original slate of characters. You can only do that once. This movie had flaws but was highly enjoyable. I give it a solid B+ grade. It's well worth watching. 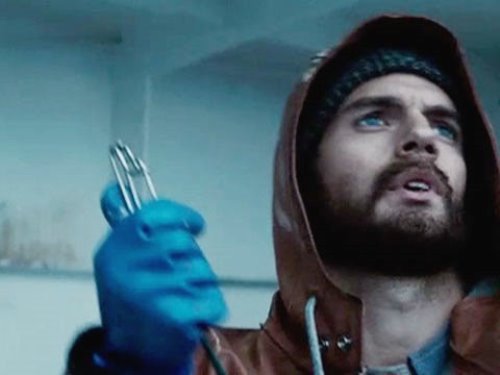