ABOUT THE SOUND - I converse and work with hundreds of musicians each year. Every band is different and there are lots of different ideas about what makes it go, but Brooklyn's Nate Martinez stands out in my mind as being perhaps the most passionate about his music. He has recorded and toured with The National and Alexei Murdoch. And everywhere he's gone, Martinez has left an indelible mark on bands and fans alike.
I've known Nate for some 5-6 years ago. At that time, Nate was the guitarist in my favorite band, a fiery Brooklyn four-piece, PELA. Two years ago, Nate released his first record under the moniker THIEVING IRONS. The results on "This Midnight Hum" were remarkable (streaming audio). We celebrated this effort on our BEST OF 2010 LIST. 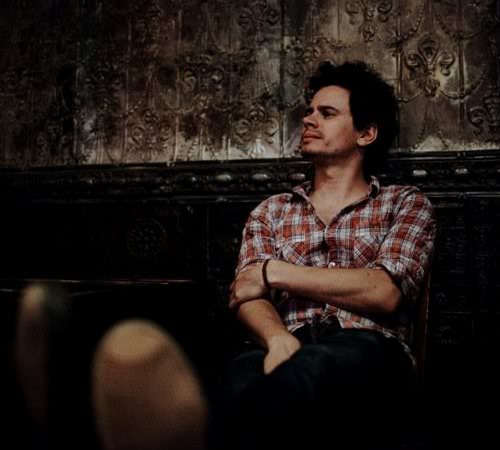 Two years removed, Martinez has again crafted a masterpiece. This one, "Behold, This Dreamer!" is both different in an evolutionary sense but still intensely personal and more celebratory than it's predecessor. Exquisite, honest, exacting - this is a focused effort. Nate sent me a copy just prior to release and it's taken me this long to put it into words. Let me make this clear: This is one of the best efforts of 2012.
Nate Martinez: "In some ways the story of this album began in a bookstore in Chicago when I found a book by William De La Mare titled 'Behold, This Dreamer!'. I was moved by the title and opened up the book to read more about it. I found that the subject matter mirrored topics that I had been exploring with a couple songs I had already written for the next album. The cover page reads: Of Reverie, Night, Sleep, Dream, Love-Dreams, Nightmare, Death, the Unconscious, the Imagination, Divination, the Artist, and Kindred Subjects.

"The topics I had been exploring in my songwriting were of ghosts, time- what it means, how we choose to spend it, and dreaming. The synchronicity of this moment had a pretty profound effect on me. I immediately bought the book but chose to never read it, only using it as a compass for my journey to complete this album. As an homage to the book and that moment I named an untitled song that I had been working on "Behold, This Dreamer! and immediately decided to name the album the same. I spent the next four months writing the remainder of the album and enlisting my close friends Dan Brantigan, Josh Kaufman and Andy Nauss to help record it.
But in many ways it feels like an album that has been in the making since I picked up an electric guitar at the age of 12, possibly even earlier... Now I am confident saying that I have found a voice that is my own. "

Paste Magazine:
“Behold, This Dreamer! is an album made with close friends in a particularly fertile, focused environment. The songs are wrought, considered, purposeful—delicately structured and impeccably stated. It’s pretense-less guitar-framed rock ’n’ roll, but with a cosmic, almost startling energy. Rarely does something so ostensibly commonplace call for such meditations.”