2023 is the Perfect Time for Bang Camaro to return with new music!

In the days before the pandemic end times, back through the seemingly never-ending, greed-fueled US political decay, we travel back mentally to a time of light filled with hope and entertainment most wild. It is now 2023 and we find ourselves mugged by our own fears, crippled by virus and weakened by wars. We travel back to the mid-2000s when Boston was a place where rock music was made and exported throughout the world. And in these brighter times, there were nights that never seemed to end and glorious, rock-filled epiphanies which ran through our ears like blood rushing off to some distant limb. We were going to live forever! The knights of this shining realm were a band of far-flung brothers who sought to create and spread joy. This is the story of Bang Camaro and - praise be, they have returned to us - today, in our greatest hour of need... It is 2023 and they have returned. 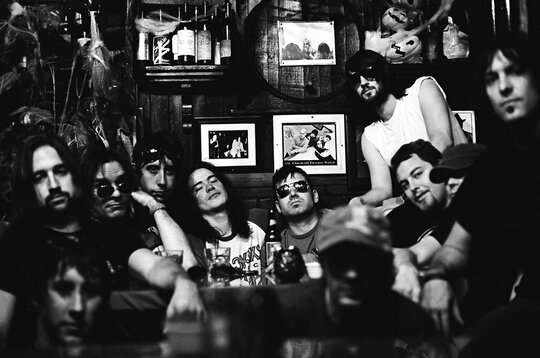 III, the new album from gang vocal rockers Bang Camaro will see the light of day in 2023.

About the Video: Directed by Bill Darmon and Rob McLain, "We Know You Know" will appear on the album 'BANG CAMARO: III'. Recorded and mixed by Mike Quinn and mastered by Pat DiCenso, the track features Mike Piehl (drums), Dave Riley (bass guitar and synth), Bryn Bennett and Alejandro Necochea (guitars). Bang Camaro is all about the gang vocals and this track is no different, featuring the above forementioned as well as appearances from John Brookhouse, Morgan Brown, Melissa Gibbs, Nick Given, Jared Marsh, Tad McKitterick, Kate Murdoch, Mike Nastri, Michelle Paulhus, Marc Pinansky, Mike Soltoff, Steve Trombley, and Rodrigo van Stoli - a virtual who's who of northeast rock talent. Who's getting excited? I'm getting excited.

Cue the Press Release: With face-melting guitar solos and a wall of gang vocals, Bang Camaro blasted onto the Boston music scene in 2005 as a reaction to the early aughts nostalgia for post-punk / new wave music. If bands like The Strokes, The Yeah Yeah Yeahs, and Interpol were going to wax nostalgic about bands like Joy Division, Bang Camaro was spawned to fill the void left by groups like Def Leppard and Skid Row. Quickly boosted by their inimitable performances - complete with approximately 20 lead vocalists to bring their signature sound to life without backing tracks, leading to one apt description of their sound as “Headbangers Ball meets The Polyphonic Spree” - and inclusion in the widely popular rhythm games Guitar Hero and Rock Band, Bang Camaro hit the road. They toured the US and Canada for five straight years, appearing at festivals such as Lollapalooza and Summerfest. The relentless touring, coupled with the releases of their debut self-titled album in 2007 and 2009’s follow-up, Bang Camaro II, and appearances on national television shows like Late Night with Conan O’Brien, Jimmy Kimmel Live, and MTV Spring Break, continued to attract fans, including stars Jimmy Fallon (who joined them on stage for a legendary performance at NYC’s Bowery Ballroom) and James Gunn."