3 Songs from The Tragically Hip 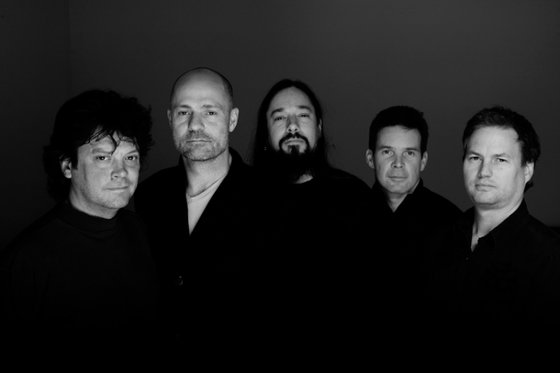 The Tragically Hip are one of the great rock bands of the modern era and are nationally celebrated in Canada. Singer Gord Downie, second from left, has died the band announced today, following a lengthy and public battle with cancer.
Rather than looking back in sadness, I would rather celebrate the life of someone I deeply admired. The Hip's magical second album, Road Apples was released in 1991 and it remains one of my favorite rock releases of all time. Characterized by simple - superb guitar, intelligent, well-written lyrics, Road Apples offers great use of classic rock instrumentation and a top singer in his prime.  Here are three big reasons why it should be in your music collection:

Little Bones is probably the Tragically Hip's most rockin' song. For many years the band fit the song into live sets, where it found a place near the end of the night. It was a fan favorite. Little Bones is important for its significance to the band. Unlike the majority of the songs on the Road Apples album, Little Bones was written during the recording of the album and kind of acts as a snap shot of where the young band was in 1991. Little Bones was written in New Orleans, where Road Apples was recorded in studio. The band took the trip down from Nova Scotia and found themselves in the Bayou heat. (Which is mentioned on this track.)

According to fan folk tale, Little Bones was written for a New Orleans cabbie of some renown. A friendly and extremely knowledgeable older man who could not retire despite his years of work because of his noted passion for gambling. The use of guitar on this one is amazing. This remains an immense classic.

So regal and decadent here
Coffin-cheaters dance on their graves music,
All it's delicate fear
Is the only thing that don't change
Two-fifty for an eyeball
And a buck and a half for an ear happy hour,
Happy hour happy hour is here

Fiddler Green is an all-time favorite song from the Hip and appropriately it may be one of the most mythically charged. Fiddler's Green is an old Irish folk lore based on the sentiment that old die-hard sailors and roving Irishmen never truly find their place. There are several old folk songs about sailors, one retired from the sea, trying to find their lot and place on solid ground. The story is that sailors are supposed to place an oar over their shoulder and walk inland until someone asks them what it's for. There - is Fiddler's Green. The song is a metaphor for many Irish as well - as a great many had to find their way through Canada to finally gain entrance into the US and finally a future for their families. A great many Irish whom entered Canada never crossed another border - they staked lives for themselves and found their place in Canada. (Like my great-great-grandparents did.)

The lyrics for Fiddler's Green interestingly mentions Falstaff. He is a literary figure used in three of Shakespeare's plays - acting as an adviser or overseer to the Prince or King. Shakespeare used Falstaff, a jolly but prideful fellow, as a comedic vessel to show that incompetence and vanity often go unpunished.

Cordelia is Shakespeare's second reference on the album. It's an amazing song. Cordelia was the third daughter of King Lear. The youngest and most hopeful of the lot, she was disowned by her father for refusing to flatter him as her sisters had. Cordelia is held in extremely high regard by all of the good characters in the play—the king of France weds her for her virtuousness, overlooking her lack of dowry.

As with most Tragically Hip albums, Canadian themes appear in the Road Apples lyrics. "Three Pistols" is an English translation of the name of the Quebec town Trois-Pistoles. "The Luxury" refers to the fleur-de-lis - the provincial symbol of Quebec - the most independent of the Canadian provinces. "Born In Water" concerns itself with a Canadian drama of the early 1990s; of whether the Canadian territories should be English-speaking only - or decide for themselves.