The Longwalls have signed on for The Outlaw Roadshow New York!

You never know who you'll run into drinking and carousing at a rock show. That's pretty much the backstory about how The Longwalls came into my life. I had heard their music and liked it a great deal but it was the human experience of meeting the band one faithful night and then re-listening that's made us as close as we are today - and ultimately landed them in their second Outlaw Roadshow lineup in as many years. One of the east coast's standout pop acts, you aren't going to want to miss what I've already come to describe as "Boston's best kept secret" for good reason.. they make dark pop and sugarly death songs better than most anybody else I know. Come watch this band prevail once again on the stage of The Bowery Electric. They play Saturday night 10/17. 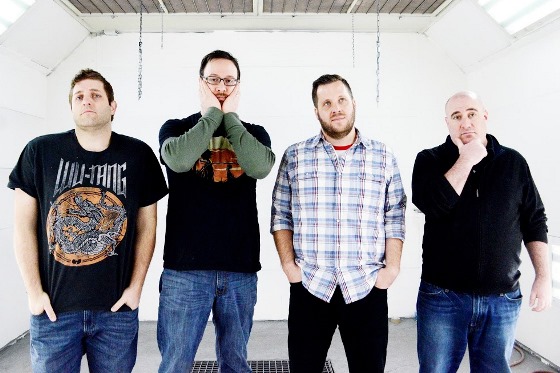 Mining the edges of indie, country, and the worst of basic cable, The Longwalls make American pop music—with hearts firmly planted on sleeves. Featuring ex-Gatsby heroes Alan Wuorinen and Brandon Comstock with singer / songwriter Dan London and DIY wunderkind Kurt von Stetten on drums, The Longwalls stalk a line between noisy post-pop and twang—exploring ideas and ideals from pop and pulp alike. The band’s 2008 home-brewed debut, Field Guide for the Zombie Survivalist, features the much-beloved track (and video) Zombies! 2010’s Dark Academy EP was called “a future classic” by the Noise. 2011's Careers in Science—the band's pulpy run at sci-fi triumph and failure—was called "a start-to-finish power-pop gem." 2012's Kowloon was called "a lovely novella of an album" by The Owl Mag.

RSVP to attend by downloading The Outlaw Roadshow app to your mobile device. It's free and easy to get and use it to register for your free ticket! [apple / ios  or on Google Play / Android]. 36 Artists and 3 nights of fun in New York! We'll share all our news with you and you can look at the incredible family of artists who have already played our shows this year!
Email Post
Labels: Boston Outlaw Roadshow Static Motor The Longwalls