With their debut album well received and a whole lot of buzz being generated in their home town of Atlanta, Quaildogs are on the move. It looks like 2016 holds a whole lot of good tidings. The songs have the sound of instant classics and this band's set gets stronger as the night goes out. Adam Duritz and Ryan Spaulding are please to announce the Quaildogs will play The Outlaw Roadshow Satuday 10/17 at the Bowery Electric. We think you're going to fall in love. 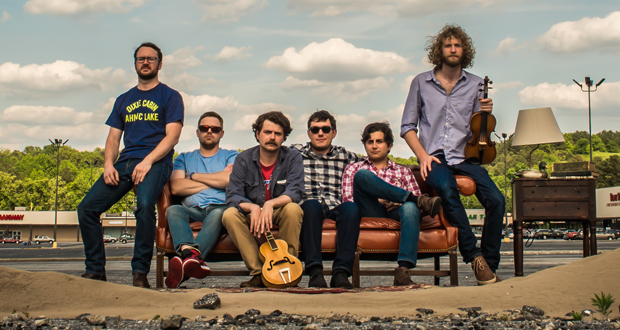 Quaildogs breathe life into a distinctive brand of alt-country that recalls the genre’s heyday as a potent '90s niche, while at the same time reveling in classic, freewheeling rock & roll. Having managed to keep together a steady and unfaltering six-piece lineup since their 2011 inception, the band has developed a unique camaraderie and sound that has earned them opening slots for a diverse set of acts including The Handsome Family, Futurebirds, The Wood Brothers, Moon Taxi, Roadkill Ghost Choir and the Dirty Dozen Brass Band—and all this before having released a proper full-length debut. Which brings us to The Getting Old Factory.

The intermittent, drawn-out recording sessions for the Atlanta band’s first LP—which took place during the summer of 2014—mirror one of the album's primary narratives: "The idea that if you’re a well-intentioned, hard-working person, you can make good in this world doesn't necessarily exist anymore," says multi-instrumentalist Michael Barnhart. On the title track, singer/guitarist Rob Josephs juxtaposes the readily available blue-collar work of his father's generation with the bleak employment situation of recent years, which he and Barnhart experienced firsthand as they both lost their day jobs and struggled to find work. "I didn't take it well," Josephs says. "It was hard times." But The Getting Old Factory (out Sept. 18) is an encouraging, uplifting record that transcends these grim realities. The group cut the album at Atlanta’s famed Glow in the Dark Studios, and the final mixes were mastered by Alex Lowe (Aretha Franklin, Cee-Lo, R.E.M.) at Red Tuxedo Studios. The sound exemplifies a work ethic hellbent on overcoming hurdles rather than succumbing to them.