NASHVILLE - I believe in music - and in the majesty of life. It was a cold morning this January when I hauled myself behind the wheel of a car headed to Logan Airport in Boston. On the way, literally just before I parked the car - a new artist named ELEL played upon my radio. From Nashville - my destination - they sparked my interest. Flash forward to my street-walking adventures in Nashville. It was January and (being from Boston) I was the only one not wearing a coat. The very first band I ran into during my venue tours in the city of Nashville, was ELEL. This all was just meant to be. And you're going to be glad for it.. 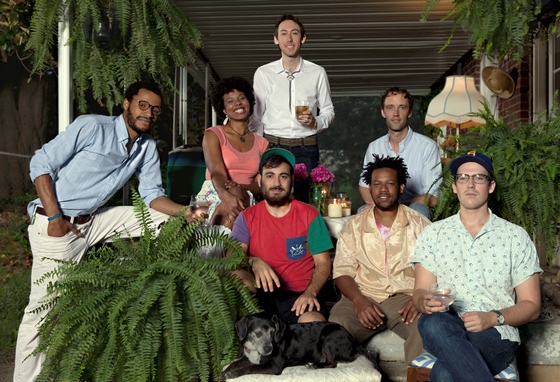 Nashville 8-piece ELEL had an exciting year. Their debut track ” 40 Watt”, an effervescent blast of feel good indie pop, drew comparisons to the likes of Vampire Weekend and MGMT, winning over a slew of blogs, radio stations (Sirius XM's Alt Nation, WFUV, KCRW) and affording them the opportunity to perform at Bonnaroo Festival, SXSW and Treefort Music Festival. The band are set to release their debut full-length LP on Mom + Pop Music.

ELEL, consisting of two horns, two drums, three keys ,guitar, bass and whole lot of vocals, was born from front man Ben Elkins (of Heypenny *listen) meeting a girl named Eliska. Ben’s now wife softened his edges while introducing him to the likes of Beach House and Toro Y Moi. Speaking on ELEL, Ben says “ It’s the outcome of me producing music that risks leaving space and communicates emotion easily and softly.” This band represents a new start for its members. Tied together by the bustling Nashville music scene but from an array of locations, ELEL includes Ben (Arkansas), Zach (Kentucky), Tim (Mississippi), Jo Jo (Queens, NY), Alex (Pennsylvania), and life-long Nashvillians (so far) Frederick, Jerry and Stefan. According to Ben, “40 Watt is a big loud dance song about dancing with one other person in a little bitty house.’