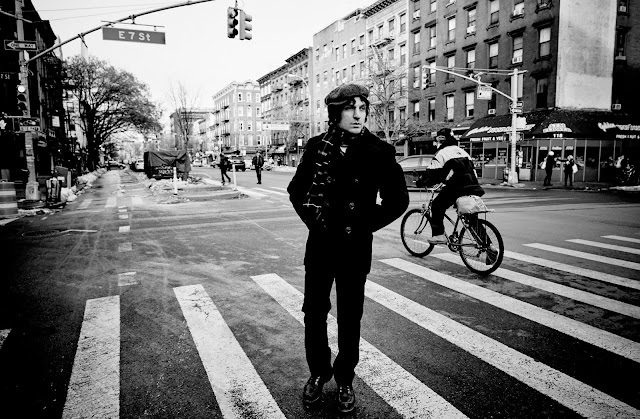 Conte+Potier photo
Today we debut a new acoustic video from Jesse Malin... "Here's The Situation." Tomorrow marks the release of Malin's greatest work to-date. The celebrated New York singer-songwriter is a longtime friend and an inspiration to a community of artists, but it's only through his latest work; New York Before the War, that we can see all of his work, all of his current thought process and emotions splayed in one place. It's a song about retaking what is not lost, an artistic alarm clock - and it's really good. For me, it's uniquely satisfying to go on the long journey with an artist and see them produce something challenging and rewarding all-at-once.

“I wanted to make a record that encompassed everything I’ve been through since I started playing hardcore when I was twelve or thirteen,” Malin says. Two years ago he had completed an album “out in the country” at White Star Studio near Charlottesville, VA. But then he realized it really wasn’t finished. “Late last December, just back from a tour, I found myself sitting in my studio apartment in an old, crooked building that had the words THE WAR boldly painted on its side,” Malin says. “In the silence of the holidays, away from family and friends, I found myself questioning everything I believed in. Looking out the window at a broken world where our values, culture and art have become instantly disposable, I felt lost and alienated, but still yearning for something more. Turning to my music, I tried to carve out a place where I could once again exist, and I sat down and wrote the rest of this record.”

Malin finished New York Before the War at the Magic Shop in Soho and Flux Studios on Avenue A . Players include guitarist Derek Cruz, who co-produced the New York sessions with Malin; bassist Catherine Popper, who has played with Ryan Adams and Jack White; and drummers Randy Schrager (Scissor Sisters) and Paul Garisto, who played on Malin’s debut solo album, The Fine Art of Self-Destruction, and with the Psychedelic Furs. Guitarist Don Dilego played on and produced the sessions in Virginia. The record features contributions from Alejandro Escovedo, R.E.M.'s Peter Buck and MC5’s Wayne Kramer, amongst others. This will be a most worthy addition to your music selection and already one of my favorite albums of 2015.

Unknown said…
Great album. Really looking forward to the live shows - the Boston show has been moved to Church FYI. This album was a long time coming but well worth the wait and kudos to Jesse for looking at what he had done and going back to revisit his vision. Inspiring...
30.3.15

carol said…
Looking forward to seeing you in Newcastle again and hearing the new album !
30.3.15