INTRODUCTION - What do two indie rock bands from New York and Long Beach, a Trappist monk, poet, social activist and mystic, and a furrier's in the Greenpoint section of Brooklyn have in common? Seemingly nothing whatsoever, and yet when they came together early last year, there was an inspirational spark, a perfect storm, and something quite, well, mystical. Moving between Brooklyn and Los Angeles, bandmates fleshed out the songs with the help of friends. These contributions include vocals from Haley Dekle (Dirty Projectors), Zina and Marika Dahlin; percussion from Stephen Hodges (David Lynch, Tom Waits) and horns from Wyndham Boylan-Garnett and Nick Kinsey (Elvis Perkins in Dearland) The musical discovery began when Nathan Willett and Matt Maust of Cold War Kids met with We Barbarians' Nathan Warkentin for brief recording sessions. 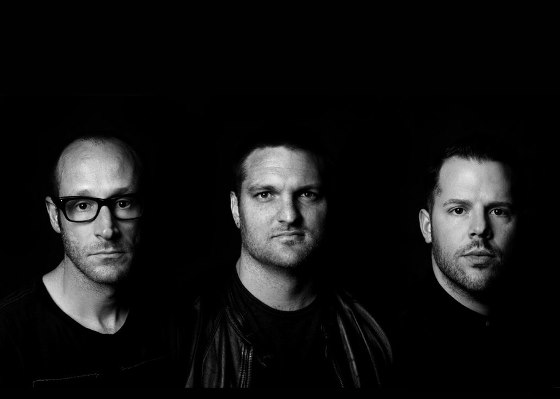 INFLUENCED BY - Willett came to them inspired by the spiritual journey and writings of Thomas Merton. Merton (1915-1968), a writer, Trappist monk, poet, social activist, mystic, penned more than 70 books and many reviews and essays. He traveled the world in search of silence and solitude, and became a student of various cultures and religions traditions which included Christianity, Buddhism, Hinduism, Jainism, Sufism and Taoism. I'll bet he never would have guessed that his poetry would be sung with such heartfelt conviction in an indie rock song - or that his words would be broadcast live behind a band some day on stage.  During Merton's time as a monk, he moved from looking inward to being deeply concerned with the outer world, participating in the race riots and Vietnam War demonstrations of the 1960s by writing about issues of peace, social equality and racial tolerance. If he were here today, with so many of the same perplexing issues facing us, would he not have been out on the road, guitar and microphone in hand?

NAME OF THE ALBUM - Is Exotic Bait has a more desperate, frantic pace than the usual Cold War Kids fare. This could be Warkentin's influence, or perhaps it was the presence of Merton's spiritual longings that pushed them into new territory. This album can be thought of as "exuberant contemplation," which is especially evident in songs like the jaunty David Byrne infused "Solitary Life" and the breathless self-realization of "(World In My) Bloodstream," a contemplation of one's place in the universe.

"I lie on my hospital bed / Water runs inside the walls
And the musical machinery / All around overhead
Plays upon my metal system / My invented back bone
Lends to the universal tone / A flat impersonal song
All the planes in my mind / Sing to my worried blood
To my jet streams / I swim in the world's genius
The spring's plasm / I wonder who the hell I am."
- (World In My) Bloodstream


DELVING INTO THE RECORD - "Turn and Burn" on the record is (yes, a slow burner and) a number with passion and desire simmering. This one's a collaborative effort, based on Merton's "Aubade: The Annunciation" (1946), part of his poetry honoring the Virgin Mary ("Prayers fly in the mind like larks / Thoughts hide in the height like hawks / And while the country churches tell their blessings to the distance / Her slow words move / Desires glitter in her mind / Like morning stars."). "All The Way Down" is all fire and brimstone, damnation and salvation matched note for note. There is an awful lot here for those who like to dig deep."Clairvaux Prison" is both social commentary leveled against bloodthirsty dogs of war and a loving tribute to a French abbey that was wretchedly converted to a high-security prison. ("It is a year of strategy / The bureaucrats, wiping the blood off their fingers / In the gates of the Temple of Reason / have voted to poison the enemy's well. / They know their danger / They need to throw some dead thing / Into the living waters that were once Clairvaux / and kill the too clean image / in the heart of such a spring.")

JUDGMENT - Is Exotic Bait gives a modern voice to a visionary author who melded a sense of social responsibility with the age old search for inner truth. This is some heady stuff for a trio of rock musicians, but it's clear they're having a good time. And you will too. The Verdict: Very highly recommended, especially for those who enjoy their head banging with a strong sense of purpose.