WOW, AMONG MY FAVORITE MUSIC FINDS OF 2014 -  New York's 5J Barrow have skills to spare.. That much is abundantly clear from my exploration of the Folk Rock sextet's brand new album, From the Dim, Sweet Light. Beyond the skilled instrumentation (there is much to talk about here - this is a skilled record) are the frollicking vocals from Eryn Murman and Jason Hite (who have spent time on and off Broadway). Childlike but focused and powerful, it's hard to believe I'm just finding out about them now. There's a solid connection there and the work of the remaining players accentuates the warm energy feel of this project.

Music that tells a story - The record kicks off with a rising dialogue ("Talking My Soul") - it's a chat of sorts, between singers Murman and Hite before the band comes in with an explosion of hip-sway inspiring music. This leads directly into the frenetic violin at the beginning of "Circus".. the strings plucking like the excited beat of child's heart, or an adult who's about to excitedly run away into the past. "The Watcher" is the band showing off. Namaky's dominant piano (in-direct-opposition to Michael Hunter's driving violin) is seriously amazing - as cool as anything you're going to hear. The song starts slow but gets hotter and brighter until it burns out. Maybe my favorite song, 5j Barrow's rock lullaby "Wildwood" rises and falls but never loses it's wild drive. 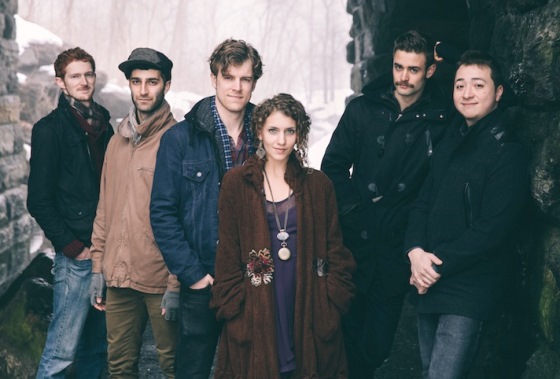 "Lynette" is soft and beautiful. It's a song that reminds us how strong our memories are. It's a story of surrender and what comes next.. "This Too" is another celebration of Hunter's violin, which is punctuated by Eric Namsky's piano and Ian Hunt's drums. This one could be really huge on a big stage.  the sound of a soft whisper and a story of surrendering to memories.. Even though they can devastate you all over again. From the "Big Rooms, Bright Lights" is soft and gorgeous. Though sparse in arrangement, the 'white space' here  is filled with sweet anticipation. The song works perfectly as a last song because, by the end of the record, all I wanted to do was hear the whole thing again.

Backdrop / What's comes Next - During the summer of 2012, the six piece began gigging frequently and have been gaining buzz throughout NYC’s most notable venues, such as Rockwood Music Hall, Bowery Electric, The Bitter End and The Greene Space at WNYC/WQXR. To support their forthcoming debut full length album, From the Dim, Sweet Light, and first tour, 5j Barrow launched a 30 day Kickstarter Campaign in December 2013. In March of 2014 the group was honored to be selected as the winner of The Battle of The Boroughs: Manhattan by WNYC’s The Greene Space.

The band plays the final Battle of the Boroughs this Friday for WNYC's Greene Space (video below) and their release shows are July 11th and 12th at Rockwood Music Hall.
5j Barrow
Web / Fb / Tw