I'm feverish as I write this. And this time it's not because of my passion for the music, it's because I've got one of these New England spring colds that turns into something else... It's found it's way into muscle and bone. And even as I type these words (clickity-clack) I' m listening to the music and just maybe wonder if the excited calamity that befallen me has something to do with the music.. You see, this is no normal band. And that's going to be abundantly clear to you in about three... two... one... 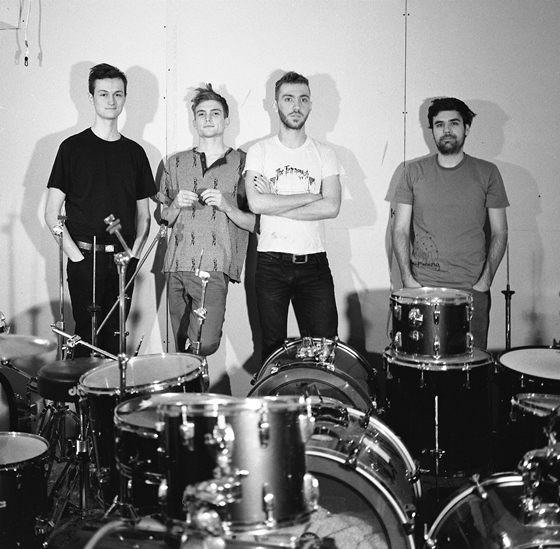 It's taken another half-decade of sugary-sweet pop music to birth the latest round of retribution from post-punk socio/political rock bands in North America. And it these days that have birthed Montreal's Ought, a collective of four players from the Montreal music scene with influences around the globe. Being distributed world-wide by the worthy Constellation Records, the foursome will release their first full-length album, More Than Any Other Day on April 29th.

This record is the result of a week of recording and mixing at Montreal's Hotel2Tango with engineer Radwan Moumneh (Suuns, Matana Roberts, Jerusalem In My Heart) in November. Have a listen for yourself. Undeniably good, this could be the best new music of the genre I've heard in more than a year - from anyone, anywhere.

Ought - More Than Any Other Day
(29 APR Release)

FROM THE BIO - Guitarist and vocalist Tim Beeler, originally a folk musician hailing from New Hampshire, fell in with New Jersey native Matt May (keyboards) and Australian émigré Tim Keen (drums, violin) – the three of them began sharing an apartment that doubled as practice space, where they were soon joined by Portland OR transplant Ben Stidworthy on bass. Ought played its first show and recorded its first EP in the apartment's largest bedroom, in the summer of 2012.

This is ground-floor level for these guys and they deserve some big love for the music they have produced here. Give them some love!