Jesse at The Outlaw Roadshow 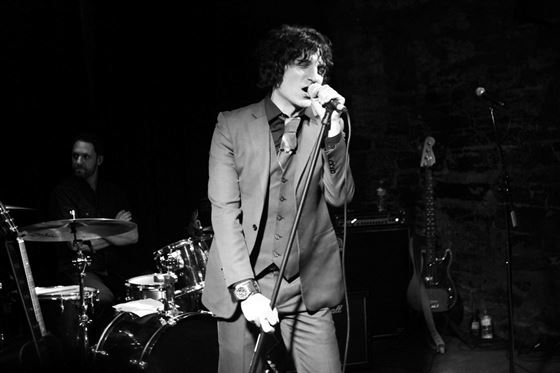 ONE OF OUR MUSIC HEROES - Born in Queens, New York, JESSE MALIN's passion for music began at an early age. Upon receiving his first nylon stringed acoustic guitar, Jesse taped an old 1950’s reel-to-reel recorder with a beat-up attached microphone to its body and the soon-to-be songwriter began his storied musical career.

Malin began playing live the age of twelve years old in the seminal hardcore band Heart Attack. After the group’s disbandment in 1984, Jesse and his childhood pals formed the rock and roll band D Generation and released three albums, touring the globe several times over before parting ways in 1999. Following several in-between bridge bands, including PCP Highway and Bellvue, Jesse Malin embarked on a solo career and has released five acclaimed records. Over the years Malin has also worked in both film and radio and is now completing production on a new album set to be released later this year.

To have Jesse on the stage with us in New York was one of the biggest thrills I have experienced as a music promoter to date. He possessed the audience, a room filled with music lovers and Outlaw Roadshow devotees. This, for the first time ever, is the video performance from that night..

Jesse Malin's Setlist:
Bar Life
Addicted
Wendy
If I Should Fall From The Grace Of God
Queen Of The Underworld
The Year That I Was Born
Riding In The Subway
Devil Blues
Do You Remember Rock 'n' Roll Radio (Ramones)
Death Star
I Stand True
USA (Reagan Youth)
Burning The Bowery
Hotel Columbia
All The Way From Moscow
Sonic Reducer (Dead Boys)


About the video / filmmaker: All footage shot for this year's Outlaw Roadshow in New York are the work of Ehud Lazin of SBG. It has been a joy to work with someone as passionate about new music and historic performances as we are. We want you to share Ehud's videos to the world! (Editor's Tip: The SBG YouTube channel is AWESOME.)