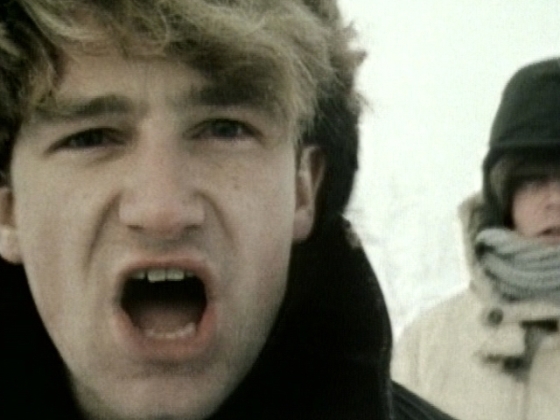 HAPPY NEW YEAR 1983 - Young and impressionable. And easily excited by the new music medium: video. That's where we find ourselves when considering the cultural impact of "New Year's Day" by U2. The year was 1983 and while perhaps my taste in music was a bit ahead due to my curious mind but the library of what I didn't know about the art of impression - was voluminous.

U2 finalized the War album in 1982 and opted for the lead single for the record released the following spring to be "New Year's Day." Mtv would export the song multiple times daily to millions of music-hungry kids. I was one of them, swept up in the powerful imagery: a rag tag army, a winter scene, a relentless drive to get to the girl.. to do what was right. I was too young at the time to know the Boy and October records. But would soon go back and learn the words to those songs too. It all goes back, I suppose, to this moment. This video.

In four minute sessions, each week, millions of children of the first world were reintroduced to old concepts of justice, light, duty and sacrifice. It was really kind of epic and not yet completely commercialized. Along the way we were clearly bought and sold on the power of the music video.

And U2? This was a band that was exceptionally good at raising flags.

"As he stood in the studio on the day in 1982 that U2 was finalizing "New Year's Day," Bono had a mental picture of Lech Walesa, the Polish Solidarity leader, standing in the snow on New Year's Day, leading a workers strike. It resonated with him.

The band members had gone through some problems, and they weren't sure they wanted to continue together. Their spiritual values seemed at odds with the rock lifestyle, but they finally realized they could use the music to share their beliefs. So it felt like the band too was beginning again.