Why PACIFIC RIM deserves a viewing this summer

You Already Made Up Your Mind?
Read This & Guess Again.

Pacific Rim, the latest creation of director Guillermo del Toro (Hellboy, The Hobbit, Pan’s Labriyth), brings back some classic genres of my childhood in a whole new format, delivering scene after scene of smashing, explosions and the utter destruction of entire area codes. The film also manages some depth of character, which is impressive when you consider that the cast is competing against 500-foot tall monsters for your attention. Let’s be honest, when’s the last time you watched movies like Cloverfield for its acting?

The story begins some 15 years after humanity has found itself at war; set upon by a race of behemoths of mind-shattering size called the Kaiju (Japanese for “strange creature). They assault city after city - killing thousands each time and devastating civilizations. These creatures come from a portal which opens in the Pacific. The Armed Forces are quickly rendered obsolete, and the leaders of the world pool their resources to create the Jaegers (German for “hunter”), giant robots that can go toe-to-toe with the Kaiju. Is it me, or is humanity only ever united when faced with extinction, after which they go right back to hating each other? 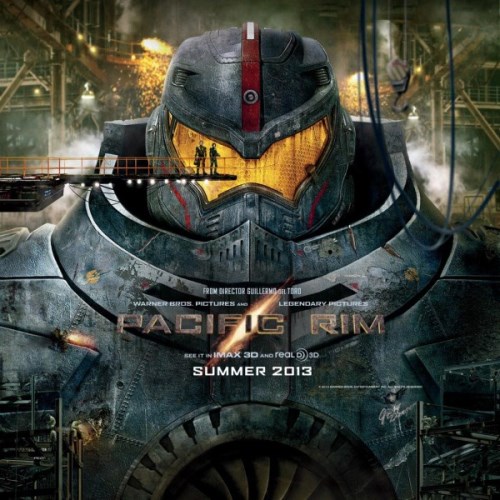 The film focuses on Raleigh Becket (played by Charlie Hunnam), former pilot of Gipsy Danger, a battle-hardened but broken warrior who quits the Jaeger program after a fight with a Kaiju ends in tragedy. Shortly after he leaves, the Kaiju start becoming stronger and stronger, and the Jaeger program is slated to be phased out. The successor to the Jaegers? A giant wall. Years of warfare and studying the corpses of the enemy, and the sum total of that is a giant wall. Take a moment and weep for this species of dullards, if you don’t mind. 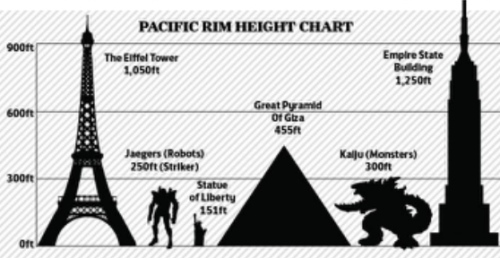 In a turn which surprises absolutely no one, the wall is a dismal failure, and Stacker Pentecost (Idris Elba), seeks out Raleigh, and teams him with Mako Mori (Rinko Kikuchi), a prodigal pilot who only lacks any real experience, and has plenty of emotional turmoil of her own. I’m sure it’ll all work out fine. 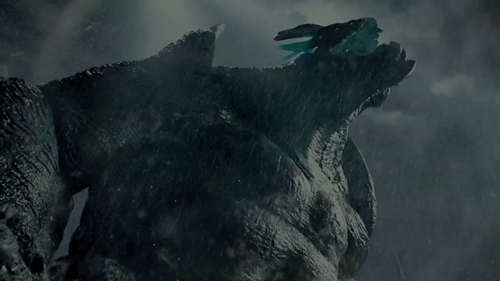 What’s interesting is that as the war drags on, the populace becomes desensitized to the idea of super-sized Godzillas constantly paying them a visit, and the whole thing becomes a sort of spectacle, with toys, T-shirts and all kinds of merchandise being created. Hey, just because the world’s ending doesn’t mean you can’t make a buck, right? 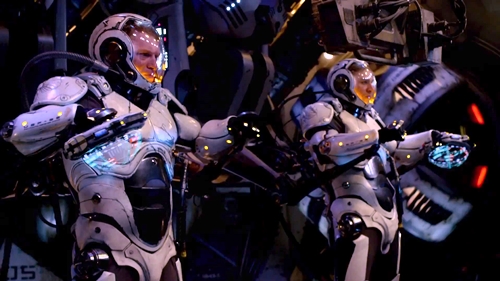 The attention to detail in this movie is quite simply mind-blowing. The exterior of the Jagers differ based on their fighting styles, and in some cases, their personality. In once instance, we see a Jaeger with three pilots, and three arms to match. But the real treat is inside. Jagers have two pilots, and rather than sitting in a pair of seats, the two are connected to the robots—and each other—via a neural bridge. They walk, the Jaegers walk; they raise their arm, and the robot does likewise. The robot gets damaged, and they feel that pain.

This connection also means that each pilot experiences the feelings and memories of the other, and any emotional baggage gets force-fed right into their cerebellum. This leads some pretty intense scenes with Raleigh and Mako, as each are carrying more than their fair share. The fight may be outside, but another battle seems to always be raging in the cockpit.

The settings begin dim and dark when the Kaiju begin appearing, but in scenes when the war is in humanity’s favor, we see plenty of blue skies, cheering crowds, and even the giant mechas on parade. Once things turn south, we’re back to a drab interior, with rusted walls and low morale. It’s a good reflection for the changing tide of the war, and the set design is solid and detailed. 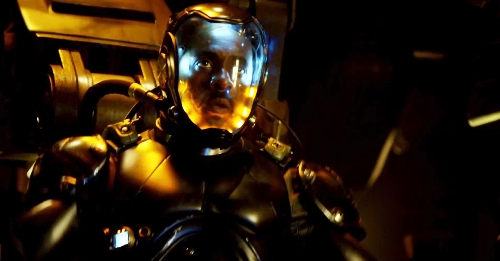 Let’s talk about these two, because they bring a lot to this movie. Polar opposites, Raleigh is emotional, fearless, and never afraid to say what he’s thinking. By contrast, Mako is timid, restrained, and checks every word she says before it leaves her mouth. At first, she seems as much as a machine as the Jaegers she monitors, but in truth, she has a dark past, and as much as she wants to be a pilot, you can tell she’s scared to death when the time comes. Pentacost is a stalwart leader, and while his performance was kind of wooden, he delivers his lines with force and dedication.

Pacific Rim is an overdose of pure nerdiness, and those of us who grew up as fans of comics, video games, and monster movies will find something to love.

Our Grade: B
worthy summer entertainment. 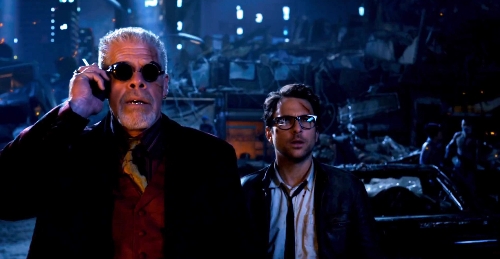