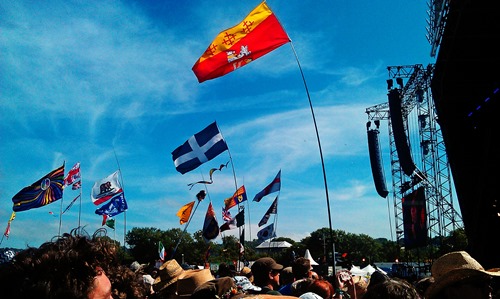 Glastonbury Festival of Contemporary Performing Arts, to give it its full and seldom-used title, is Britain’s greatest music festival in just about every sense.

Its heritage is unmatched, its place in cultural history assured, and no matter how many people tell you that it’s lost all the magic it once had, sacrificed on the altar of commercialism, there’s still nowhere quite like it anywhere. Such is the enormity of Glasto (pick your statistic - 177000 people, 100 stages...), no-one can ever hope to see even a tenth of the music, let alone stand-up comedy, circus, live recordings of BBC radio shows and late-night areas painstakingly crafted to resemble post-apocalyptic wastelands shot through with green lasers that criss-cross the sky into the early hours. Here, then, are a few of the things I managed to see. Some old favourites, a couple of hotly-tipped newcomers and the occasional out-of-the-blue discovery whilst wandering the 900 acre site.

Sitting down with the programme and a pen, a few things jumped out as must-see sets, and among the first was HAIM. 3 guitar-wielding sisters (plus bolt-on drummer and token male Dash Hutton) who seem to have misspent their youth rocking out in the garage, their early Pyramid Stage slot was raucous, joyous and hugely enjoyable. A diet of Patti Smith and Blondie is evident in both their riffs and their snarling vocal delivery, whilst their clever, rhythmic vocal interplay beguiles. A well-judged cover of Fleetwood Mac's “Oh Well” was a hit with the crowd, and their originals bear repeated listening. Their debut album is out on Polydor in the autumn.


Keeping with the theme of emerging female vocal talent, the programme also featured LUCY ROSE. Fresh from her UK tour support slot with Counting Crows (not to mention her appearance at this year's Outlaw Roadshow this March in Austin!) and riding high on a wave of positive publicity, Rose and band drew an enthusiastic audience and I couldn't get within 50 feet of the Avalon stage, such was the fervour of the tightly packed crowd. Her delicate acoustic songs are given new, glorious life by a potent backing band, and all of them seemingly having the time of their lives. Time and time again Lucy swapped smiles with her musicians, sharing a look that seemed to say that they couldn't quite believe their luck. “Shiver” was greeted with cheers followed by rapt attention; Rose inspires dedication in her fanbase, and her Glastonbury appearance will have swelled their ranks.


The Acoustic stage is a strange place, hamstrung somewhat by the slope away from the stage end of the big top tent. At various points it played host to the legend-packed BILL WYMAN'S RHYTHM KINGS (great fun), MARTHA WAINRIGHT (perhaps a little overwrought?) and LUCINDA WILLIAMS, who on this evidence perhaps ought to retire. SETH LAKEMAN was superb, helped by the return of percussionist extraordinaire Cormac Byrne to a band that already wielded the considerable power of Seth's brother Sean and double bassist Ben Nicholls. My acoustic highlight though has to be the ZAC BROWN BAND, who grasped precisely the Glastonbury atmosphere and delivered a heartfelt, entertaining afternoon set of pop-country full of energy, dexterity and harmony.

A rare opportunity to see Martha perform with brother Rufus Wainwright unfortunately clashed with ELVIS COSTELLO AND THE IMPOSTERS on the Pyramid (who, it must be said, delivered a hit-packed afternoon set and a fiery, fearsome performance of Tramp The Dirt Down, his death-to-Thatcherism anthem), so I was intent on catching Rufus in his headline solo slot. Relaxed, seemingly at peace with himself and the immense hillside arena before him, he sauntered onto the stage, sat down at the Steinway grand and opened with “The Art Teacher”. At turns playful, delicate and grandly operatic, he delighted the crowd with his version of Leonard Cohen's Hallelujah and a new song, swapping to guitar for a while before sitting back down at the piano to close his set.


The constant, inescapable fact about Glastonbury this year was THE ROLLING STONES. Everywhere you looked, Stones t-shirts. Cardboard masks of Mick and Keef were on sale, Brown Sugar blared from every food stall and t-shirt stand, and above it all, a giant metal bird lay dormant atop the Pyramid Stage. Rumours flew; eventually, a man selling fried chicken told me that he knew someone who worked for the sculptor who’d built the thing, and with a nudge and a wink told me to keep an eye on it during the Stones’ set.


Nobody I spoke to had ever seen the Pyramid Stage like this; perhaps 90000 people on the hillside, more pouring in at the back, hundreds of yards from the stage, desperately seeking a scrap of ground on which to stand and witness the coming of the greatest rock’n’roll band the world has ever seen strut their ageing stuff on perhaps the greatest stage this island has to offer. The sun set over Glastonbury Tor and the atmosphere was at fever pitch. The allotted time arrived, passed, and people began to look nervously at one another. All the anticipation built by years of rumours weighed on this moment.

Out of the darkness, a disembodied voice invited us to please welcome to the stage, THE ROLLING STONES! Jumping Jack Flash, It's Only Rock'n'Roll, Paint It Black, Gimme Shelter. Quickfire, no let up, a menacing opening salvo full of power and intent; any doubts as to whether they were up to the task were swiftly put aside. A brief respite in the form of a tender Wild Horses was followed by the punchy garage-rock of their newest song, Doom and Gloom, and it became clear that Keith Richards and, in particular, Ronnie Wood, were on sparkling form. Jagger, meanwhile, was pacing the stage like a man possessed. Running back and forth, clad in black leather, belying his years and exhorting the crowd, and his band, to join him in his slightly manic state.

A welcome guest appearance from one-time Stone Mick Taylor livened up what could have been a slow middle section, weighed down by too many visit to Their Satanic Majesties Request. There was a hint of irony, then, when Sympathy for the Devil injected some drama back into the proceedings; as promised, the giant metal bird rose, stretched its wings and began to shoot jets of flame into the air. There aren’t many things that can upstage the Stones, but lighting up the smoke-filled sky with jets of fire spewing from a set of immense metal wings? That’ll do it. A swift return to the hits restored our attention to the stage, as Start Me Up, the gloriously ragged riffing of Tumbling Dice and a singalong Brown Sugar closed their set. An encore of You Can’t Always Get What You Want (assisted by two choirs) and Satisfaction (joined once more by Mick Taylor) rounded off a performance that had a deal more potency and gravitas than it had any right to. A band long since doomed to resemble caricatures of themselves shouldn’t be able to move people the way the Stones did on Saturday night, but they did.


Like thousands of others, I awoke on Sunday morning a little stunned. Shaking off a Stones-and-cider-induced stupor, I joined a steady stream of people stumbling back to the Pyramid Stage. Perhaps a little bleary-eyed, we were treated to a suitably soothing set from Sweden’s FIRST AID KIT. Overawed by the Pyramid at first, there was an endearing innocence to them as they gazed out on the crowd. They soon settled, treating those who had crawled out of their tents to a sweet, endearingly honest set of their songs mixed with a pair of choice covers. Lashings of pedal steel sound a touch incongruous next to Swedish accents, but when they hit their stride it all makes sense. Highlights included their tribute to their country-rock heroes "Emmylou" and a sensitive, reverent take on Paul Simon's "America" that brought smiles to the faces of onlookers.

There are others I haven’t the space to mention. Long-time favourites THE STAVES played three sets, including one that drew more people than it had any right to at 11:30am on the Other Stage; they continue to delight. KENNY ROGERS achieved feats of audience rapport I would have previously considered impossible, and played The Gambler twice. Chic, led by white-suited producer-extraordinaire Nile Rodgers, turned the West Holts into a disco, and Liam Gallagher’s BEADY EYE played a secret set so early in the morning that me and thousands of others didn’t hear about it until after it had happened. Only at Glastonbury...