Matt Sucich - My Only Problem With You

NEW, NEVER BEFORE HEARD SONG RELEASED AS A VINYL 7" 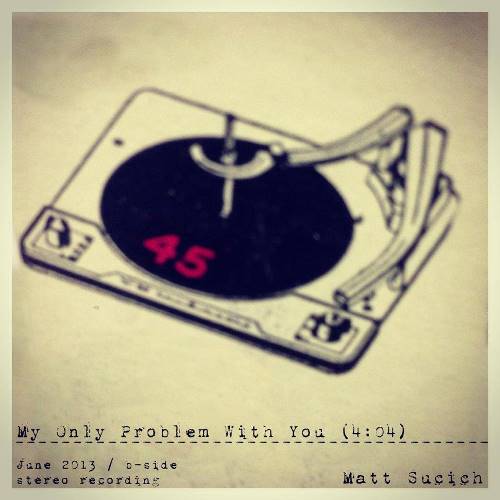 For somebody that anticipates and prognosticates a great deal, I still get surprised a lot. And in this case, certainly, that's very good news for both of us. MATT SUCICH (pron: Sue-Sitch) made his debut on the world stage at Bonnaroo Music & Arts Festival in Manchester, TN, receiving high praise and pleasant comparisons from Andy Langer (Esquire Magazine) on his “Best Other Bands Of Bonnaroo” list - “Because this Queens singer-songwriter is trying to break your heart. What appear at first glance to be simple love songs quickly reveal a Wilco- and Iron & Wine-like depth (and desperation).” There were appearances in NY for CMJ and in Austin for SxSW.

2012 was a banner year but it got much better in November, as Sucich released his 2nd full-length album, Layers, to a capacity crowd at NYC’s Rockwood Music Hall.

Then came The Outlaw Roadshow. We selected Matt to play for our audiences and he never looked back, delivering a masterful set for our crowd (15K were served over two days!). It was so good that during the grand finale of our second show, Matt who was attending this one as a fan - was spotted by us in the crowd and called back on stage to close the two day event with Adam Duritz, Filligar and others.. It was a magic moment!

buy it on vinyl / lyrics - both are below:

Sucich played big at the Outlaw Roadshow in Austin this March