No one likes to see their friends in a bad way. A Benefit this Thursday evening in Boston will shine a bright light on one of New England's finest bands; BROWN BIRD, consisting of David Lamb (guitar, banjo, percussion, vocals) and Morganeve Swain (fiddle, cello, upright bass, vocals). Lamb, who carries no medical insurance, is battling leukemia. The event at Brighton Music Hall tomorrow featurin an all-star contemporary lineup of friends: Tallahassee, Joe Fletcher & The Wrong Reasons and Coyote Kolb will raise funds towards those efforts.

Brown Bird have played an important role the last few years, having made their mark in Providence and in Boston, the pair have toured the country extensively the last 16 months. They played a stunning set at last year's Newport Folk Festival - joining the ranks of immortal performances at Fort Adams. They have exported their music - acting as ambassadors for New England - in venues around North America. 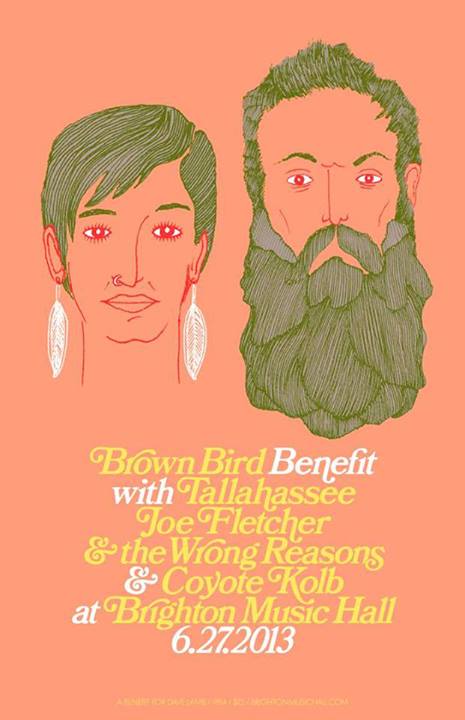 By the end of April, it was becoming increasing clear that wasn't right with David Lamb. He seemed uncharacteristically weak after shows. David was soon after in the hospital, being treated for severe anemia and dangerously low blood levels. It wasn't until a few weeks later that physicians were able to diagnose the musician with a form of leukemia for which David is now undergoing chemotherapy treatment.  This regiment would be taxing on anyone, but it's even more crushing when you are uninsured.

Please get familiar with this band if you're not already. David Lamb is a gift and Brown Bird is an important band. We need to help them through this. Listen, buy an album. And if you can give, please do. If you're in the Boston area, attend tomorrow's show at the Brighton Music Hall. Tickets are available for $15. It's going to be a wicked good time - for the greatest of causes.

These are good people who have influenced a lot of people! Similar fundraisers are planned for Kittery, ME on July 5 and in Providence, RI on July 6. Readers: please send us updates on any other events.


David Lamb at The Outlaw Roadshow in Austin, TX - March 2012