Get to know THE PINZ

One of the most exciting bands I had the pleasure of seeing (twice) at SXSW was Jacksonville, Florida rock band, THE PINZ, who were in Austin to promote their latest EP, ANTI-COMPLACENCY LEAGUE. The band consists of brothers Walter Jerk (vocals/guitar) and Johnny Wyatt (bass/backing vocals) who started playing together about five years ago, and Walter’s long time girlfriend Alana Anderson, who joined the band two years ago after many issues with previous drummers.

The music on ANTI-COMPLACENCY LEAGUE is an exuberant mix of punk and pop that bursts forth from speakers like a wave of youthful irreverence. The band, whose members are all under the age of 21, cover typical subjects like love and self-loathing, but the presentation makes the material feel fresh, rather than just rehashed. 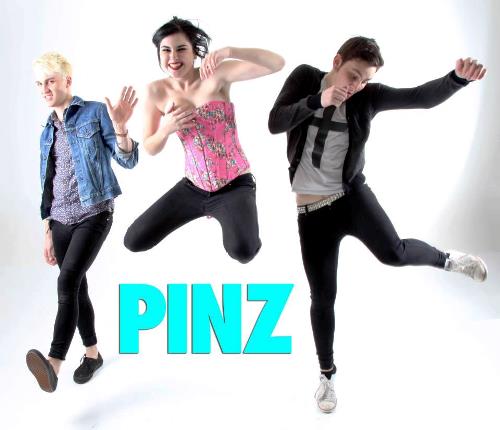 To my ears, there are definitely hints of The Ramones and early Green Day, with quick smart hooks and a sense of humor, however, the band dismisses the comparisons. “There was no one or two influence for that record,” Jerk explains, “the reason being we had songs we've been playing for a few years, and songs we'd been playing for a few months. I'll admit there was some punk influence in the earlier stuff, but I don't consider our music "punk". I don't identify with any of that nonsense, but in the earlier years there was a lot of Ramones records laying around. I'd like to think we've matured since then, musically anyway.”

The EP itself is a rock ‘n roll hit and run, seven songs clocking in at twenty-one minutes. Each track is quick and catchy enough for radio airplay. My personal favorites being “Break Up Song” and “Truth,” the latter which adds organ for an extra layer of texture.

Keeping the momentum from SXSW going, the band has already lined up shows at Toronto’s NXNE Festival and an appearance on The Warped Tour. “The future looks good. We've got other traveling outdoor music festivals lined up. Lots of different things in the works. It's hard to say exactly what’s in our plans because they are constantly changing,” Jerk says. “We feel like we've been getting a great buzz going and are thankful that people want to come back and see us play each time. We're busy hashing out new songs, a new direction, and a fresh sound. We've been listening to tons of old and new records alike, so it’ll be interesting what come of it!”


This EP lends itself very well to summer fun, whether it’s a pool party or driving around with the radio up and the windows down. I predict big things for The Pinz, and as the title track with advise you, “You can’t beat’em, so join the team.”