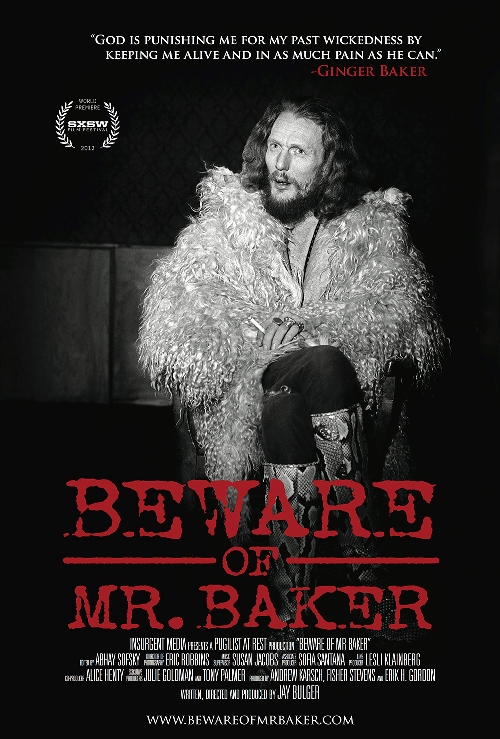 Whether you realize it or not (and I certainly hope you do), GINGER BAKER was the world's greatest drummer for decades. In the grand scheme of things he's probably still the best there ever was. Behind the kit for Blind Faith, Cream, John Mayall’s Bluesbreakers, Hawkwind, Graham Bond Organisation and many others, he's seen more life and more music than the rest of us can even imagine. Because of his penchant for living each moment like it's the last and surviving decades of this personal abuse, he also could be one of the most colorful men in rock 'n' roll history.

I was extremely enthusiastic to see the film (catching it at the Boston Independent Film Festival last year) but even I could not have anticipated just how profoundly powerful and endlessly entertaining BEWARE OF MR. BAKER the documentary would be. The movie profiles Baker's life through never-before-seen video clips, through reluctant and fiery interviews with ex-wives and children, and in Baker's own words and through those of fellow musicians; Steve Winwood, Charlie Watts, Eric Clapton, Neal Peart, Carlos Santana, Mickey Hart, and Marky Ramone.


GINGER'S STORY BEGINS - Born in South East London the same week the Nazis began bombing, Peter Edward "Ginger" Baker’s first memory was running after a train that carried his father off to death in WWII. From his music to his life, at the expense of family and fortune, Ginger would never be left behind on the tracks again. Though best known for his work with Eric Clapton in Cream and Blind Faith, the world’s greatest drummer did not hit his stride until years later in 1972 when he drove the first Range Rover ever produced from London to Nigeria in pursuit of the African rhythms and musical icon, Fela Kuti. There he found his Mecca of drumming, introducing the African beat and “world music” to the West, years before any other musicians in the field. 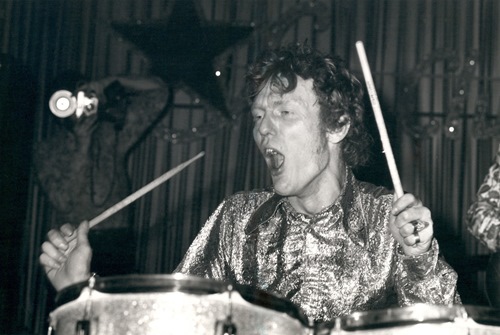 The film is directed by Jay Bulger who initially pitched the story of doing an interview (here it is) to Rolling Stone magazine years ago. He ended up tracking down Baker - ever reluctant to share information - in his South Africa compound with a 29-year-old internet bride and Baker's 39 polo ponies.

In an unexpected twist, the story is also somehow about Bulger's passion, his drive to make the movie work. That much is clear in the opening sequence in which (near the end of filming with Baker) Bulger is threatened by Baker in his home. Bulger does not respond quickly enough and is met with a blow from Baker's cane - across the bridge of his nose. Ginger Baker is still a fiery porcupine. And it's hard to imagine anyone else getting the goods like Bulger does here.

Chain smoking and ingesting copious amounts of morphine while sitting in his leather recliner, the 73-year-old Baker takes to Bulger, deflecting questions about years of mounting lawsuits, claims of unsupported children, and near death experiences - each of which the musician shrugs off.  My favorite bits of the movie are all those never-before-seen bits of live footage (seriously folks you have never seen some of this Blind Faith and Cream video) and the fact that nearly every person that Jay Bulger runs into in this movie, says the same thing when approached for a quote on Baker: "He's still alive?" Then each person shakes their head knowingly. It takes a lot to take down such a legend.

Much credit for this film's measurable success needs to also go to Editor Abhay Sofsky who helps marry the various bits of video archive with Bulger's direction, sewing together several narratives with the telling bits of animation and illustration (credits there to David Bell and Joe Scarpulla) which make this movie really go. This is the best music documentary I've seen in years. It went on sale yesterday. You need to own this one. Even those that don't know the bands or the music will find this one infinitely entertaining. 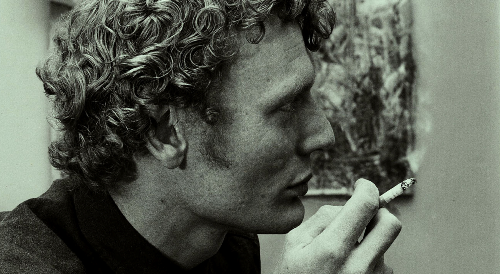