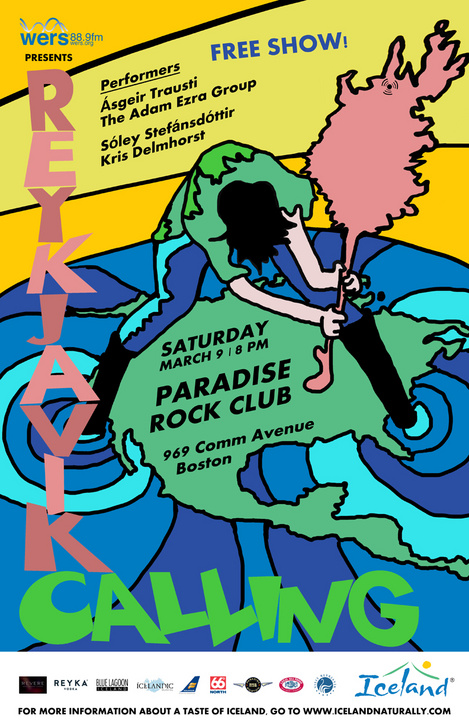 Each year a few of Iceland's most interesting and innovative emerging musicians come to Boston as part of A Taste of Iceland - these performers are paired with their Boston musical counterparts for magical one-off collaborations. The show is free to the public showing live audiences what Iceland can offer but also depicting new sides to familiar local faces and sounds. A Taste of Iceland is presented by Iceland Naturally in partnership with Icelandair, Reyka Vodka, WERS 88.9fm Boston and many others. This year, two Iceland/Boston duos were spotlighted: Ásgeir Trausti + The Adam Ezra Group and Sóley Stefánsdóttir + Kris Delmhorst.

Ásgeir Trausti at The Paradise Boston

Singer-songwriter Ásgeir Trausti only just released his debut album, Dýrð í dauðaþögn, last September, but already he has become quite a sensation is his native Iceland. At just 20 years old, Ásgeir's sound is incredibly sophisticated and refined. You know an artist has something special when a song elicits an emotional response, even when you don't understand the language. He has training in classical guitar, which is evident in his lovely acoustic playing style. He comes from a musical family and in fact, his father and a friend contributed lyrics to his debut album. Produced by Gudmundur Kristinn Jonsson, a guitarist in the Icelandic reggae band Hjálmar, the album was nominated for the 2012 Nordic Music Prize, and the lead single, "Sumargestur," was number two on the Tónlist, the official Icelandic Singles Chart. An English version of the album is in the making, but if you're a purist and prefer the original Icelandic lyrics, the Icelandic version is available from Icelandicmusic.com. In addition to his solo music, which is in a wonderfully melodic folk vein (with a touch of contemporary electro at times), he also the guitarist for the Icelandic indie rock band The Lovely Lion.

The Adam Ezra Group at The Paradise in Boston

Collaborating with Ásgeir Trausti was the Adam Ezra Group, which is an interesting pairing. As much as the Icelandic musician seems deeply a part of his Nordic culture, this Boston band is deeply immersed in the American experience, with a gritty, rootsy feel that informs their music. At times they have a country-flavored acoustic folk vibe, and at other times they're just straight-up, hard-driving, road traveled rock. I'm surprised to see they only released their debut album in 2011, because they sound like they've been playing together a hell of a lot longer than that. Indeed, they've been quite busy these past few years, touring with The Avett Brothers, Rusted Root, Deer Tick, Jason Mraz, Los Lobos, Dwight Yoakum and many others. Their most recent recording, released back in December, is Daniel The Brave. It's a collection of acoustic songs that sheds light on the more introspective side of this fine band, and showcases Ezra's songwriting prowess. 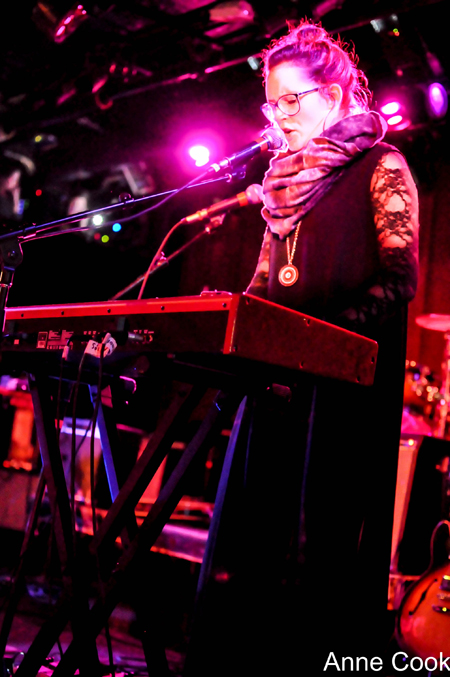 This is Sóley Stefánsdóttir's second appearance in Boston - she performed at the Paradise last year as well. A singer-songwriter and pianist who performs with the Icelandic indie collective Seabear, she also has a background in composition. She released her debut solo album, We Sink, in 2011. Sóley has a sweet, delicate and dreamy voice but there's also a playful quirkiness that comes through strongly in her songs and performance. This is what endeared me to her immediately. Last year, she performed a brief but wonderful set with Dave Monroe of Air Traffic Controller. This time, she'll be performing with singer, songwriter and multi-instrumentalist Massachusetts-based Kris Delmhorst.

Kris Delmhorst at The Paradise

Kris Delmhorst has been performing since 1996 as a singer-songwriter, and has been part of Boston's folk scene. She's a multi-instrumentalist, performing on guitar, fiddle, viola, cello, piano, organ, bass and mandolin. Her debut album was Appetite, released in 1998. She collaborated with Sean Staples and Ry Cavanaugh as The Vinal Avenue String Band, and with her husband, fellow singer-songwriter Jeffrey Foucault, on the 2003 album Redbird. Her most recent full-length solo album of original songs was Shotgun Singer, and in 2011, she put out a cover album of songs by The Cars, with whom she developed an early musical affinity. Now based in western Massachusetts with her husband and young daughter, her American perspective and Sóley's Icelandic roots made for a fascinating collaboration.

At the end of the evening, all the artists performed together 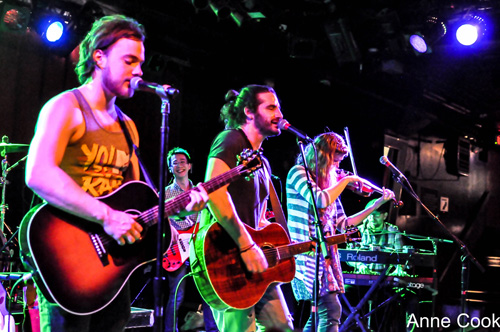