A Beautiful, Glowing Sound - There's much to be made of VOX POP'S rolling & tumbling pop music. It's all at once soothing, but that tranquility - inspired interestingly by a flurry of multiple instrumentation, masks the depth of the lyrics and the urgency of (singers) Jamie & Katherine's vocals. The band uses guitars, cellos, violas, snare drums, synthesizers, medieval harmony and glockenspiels in their recordings - providing real depth and the mark of professionalism needed for the band to stand out from their music peers in Brooklyn.

Highly Recommended - Much of Vox Pop's soon-to-be-released debut album was recorded in a small room in Oakland, CA before they ventured down to Los Angeles to mix their first EP, the red-hot "French/Funeral" (2012), with Danny Kalb (Beck, Ben Harper). This is Vox Pop's first Outlaw Roadshow. We think they could be the next big thing and are simply delighted to have them with us in Austin! 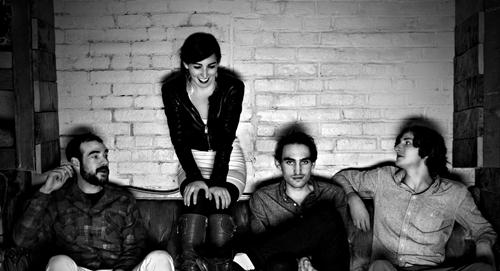