Cross-Genre Song Builders from London - I think the reason I like these guys so much is because when I first listened to "While I Still Can," I was instantly brought back to prog rock haze of the mid-1970s. Don't get me wrong; I say that in a most reverent way. The bluesy vocals, the wailing guitar solos, the crashing percussion, and damn, that seriously rockin' flute (Flautist Kathryn Thomas of the award-winning Galliard Ensemble is to credit here - making it impossible not to elicit sweet Jethro Tull flashbacks)… it's all just so comfortingly familiar. And yet, modern production values and all the musical history and life history since that time influence their sophisticated sound. HATS OFF GENTLEMEN IT'S ADEQUATE may feel at first like a kind of a Rip Van Winkle story, but they're fully acclimated to the present day.

The main inspiration for songs on their recently released record, Invisible, is singer, songwriter and multi-instrumentalist Malcolm Galloway's experience of living life with Ehlers-Danlos syndrome. It is a condition that, while not visible from the outside, can cause great distress and anxiety for the sufferer. 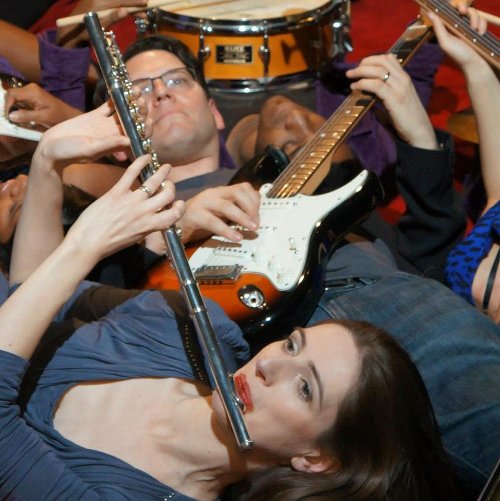 WHILE I STILL CAN

"Didn't you know that I could fly, at least until I hit the ground. /
Didn't you see me waving, as I went past your window?"

Though the lyrics can at times be rather dark and depressing, the music feels defiant and celebratory. In quieter moments, it's very pretty. Though I felt the need to immediately trumpet the unabashed prog rock of this fine band, I must say that they are not strictly beholden to any style. The songs on this debut album also dip into some acoustic Folk ("By the Water," "Wait for the Storm"), Classic Rock ("Can't Let You Go," "Me Again"), Blues ("Just So Love You") and even Electronica ("Hello"). They regularly perform around the London clubs, and hopefully elsewhere very soon.

Anonymous said…
Thanks so much for your kind support. Best wishes, Malcolm
Hats Off Gentlemen It's Adequate
4.2.13