Umphrey's McGee at Fete in Providence

Billed as “An Evening With Umphrey's McGee” the few hundred fans standing in the cold to get inside the club were all abuzz.  The Indiana band, who are currently in their fifteenth year, seem to be getting larger as the venues seem to be the same size.  This will change.
Largely known in the jam band scene, it's a pigeonhole label that no longer fits the band well.  Sure they jam, and no two set lists are the same but they seem to mix prog rock with elements of heavy metal. Excluding one member the band has been the same since inception.  The six member group filled the Fete stage with their gear, leaving little room for them to move about.  All of them are such skilled players they don't need to make up for it with wild stage antics. 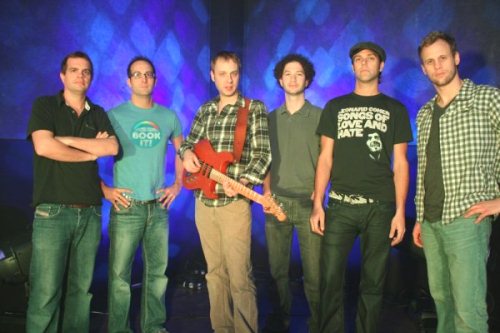 Due to the lengthy queue of patrons outside the venue, the band took the stage about 30 minutes later than planned but wasted little time getting the room red hot.  By the second tune “Syncopated Strangers” the band was already in “tease” mode, dropping guitar lines from George Benson's “Breezin”.  Singer/Guitarist Brendan Bayliss thanked the Rhode Island crowd for coming, as it had been “some time since we've been here” but then took a comedic turn saying the next song was dedicated to Notre Dame linebacker Manti Te'o. (the band went to/met at Notre Dame) and they went to their first cover of the evening “Girlfriend  is Better” (Talking Heads).
The first set was one long crazy jam to these ears and the room just moved.  Kris Myers (drums) and Andy Farag(percussion) were so busy you'd swear they had four arms each, if not more.  Bassist Ryan Stasik has solid bass fills all evening and never was too high in the mix, and was never overly flashy.
After a set break the band returned to the stage with a one two punch of Pink Floyd.  In the Flesh->Another Brick in the Wall pulled the room right back in.  Keyboardist Joel Cummins took the lead on Brick and the band did a very solid and spot on cover of the tunes.


The second set was solid and the band teased a little Hall and Oates but the final few songs were really the “moments” of the night.  No UM review can be complete without mentioning guitarist Jake Cinninger.  Cinninger uses the guitar as an extension of his fingers.  From his monster riffs, to the frenzied finger tapping on the fret board.  Not sure if this reviewer hasn't been paying attention, but why is he not mentioned on “top guitar player” lists.  One could argue that “speed won't win the race” but it is his technique as well.  Cinninger should be in talks as one of the better guitar players out there.
Early morning the doors to the hot club opened to the very cool Providence night and the streams of smiling faces showed it was another solid evening of music.
Set 1
Domino Theory
Syncopated Strangers [1]
Girlfriend is Better > Morning Song
Dump City
Uncommon > Mulche's Odyssey
Set 2
In the Flesh / Another Brick in the Wall
Sociable Jimmy > Visions [2]
2nd Self, Tribute to the Spinal Shaft
Go to Hell
Higgins
Encore: JaJunk