Chris Fullerton is a Music & Film writer.
He lives in Austin, Texas. 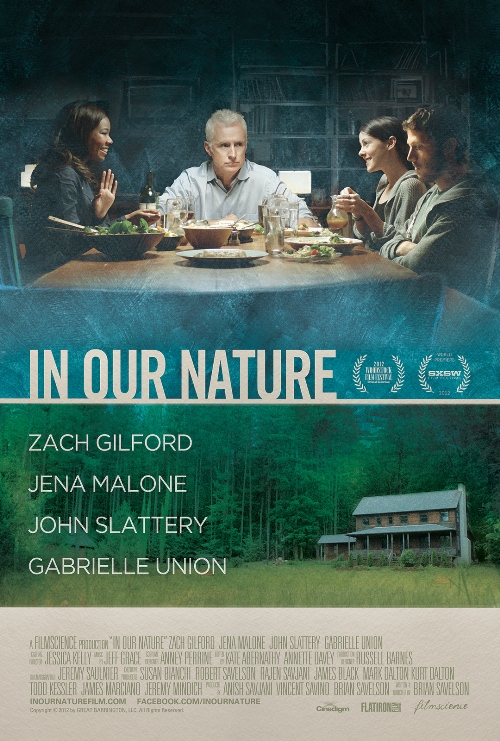 I try not to let other people’s opinions influence the way I review a film. In fact, I do my best not to even hear or read other people’s opinions before I see a movie or put my thoughts down on paper. Well, virtual paper. However, on my way out of the screening for writer/director Brian Savelson’s IN OUR NATURE, I heard another film critic say “I thought it was slow.” I had to chew on that for a moment…but first, let’s get into the actual premise of the film.

Young couple Seth (Zach Gilford) and Andie (Jena Malone) are heading up to the country to Seth’s family cabin for the weekend. While the young lovers are, well, being young lovers, they are startled by the arrival of Seth’s estranged father Gil (John Slattery) and his new much-younger girlfriend Vicky (Gabrielle Union). The tension is immediately palpable as the four attempt to untangle themselves from the awkward encounter.


Andie and Vicky try to steer the father and son toward each other, but are met with stubborn resistance on both fronts, as both men, despite their differences, are very much alike.

I started to list all of the conflicts in the story, but Savelson piles them on higher than mashed potatoes at Thanksgiving dinner. From the small, (Seth and Andie are vegetarian/vegan) to the large, (Vicky and Gil are considering starting their own family), every scene unfolds a new twist or wrinkle in the dysfunctional story of Seth and Gil and years of tension and resentment that have been building since Seth’s childhood and will culminate with the sale of the cabin.

I enjoyed seeing Zach Gilford outside of his character from FRIDAY NIGHT LIGHTS. I think he shows that he can transition from playing a teenager on television to a leading adult role in a drama. I would say the same for Jena Malone who seemed to play the troubled teenage girl in every indie movie for the last ten years. Slattery and Union also filled out their characters nicely and as a group, the chemistry was noticeable. 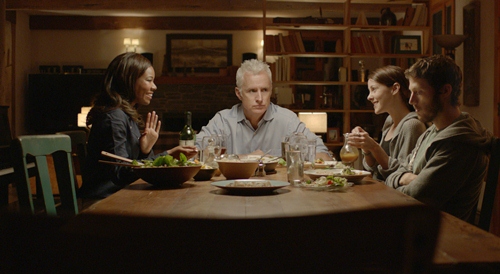 Now back to that initial statement of “I thought it was slow.” At no point did I ever think to myself that the story dragged or did my mind wander to other things.

I have some criticisms, but being slow definitely wasn’t one of them, and I have to wonder if some people have just become accustomed to car chases and explosions and CGI and can’t appreciate a story with essentially four characters and one location. Savelson throws every possible conflict in the book into the film. It’s maybe a little too much at times, but the dialogue is believable, the acting is believable and the scenes are pieced together nicely.

OUR VERDICT - In Our Nature isn’t perfect, but it isn’t slow. It’s a character-study performed by solid actors. It probably won’t reach a large audience or draw a lot of people to theaters, but if you’re a fan of, let’s say, Raymond Carver’s short stories, you’re probably going to enjoy this film. If it plays near you, you can do much worse for a matinee. At the very least, rent it. 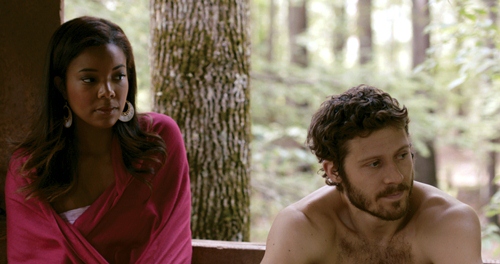