Reuniting The Band
By Julie Stoller 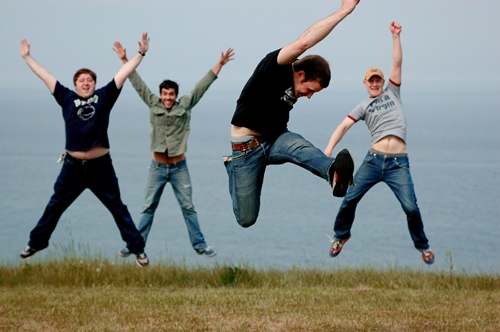 The Promise Ring - Happiness Is All The Rage
Famous for their confessional style of songwriting and signature pop sound, The Promise Ring would called it quits In 2002. To The Promise Ring's credit; four albums, which allowed them to amass underground fans from coast to coast. Today, the band has reunited with the help of Dangerbird Records CEO and Co-Founder Jeff Castelaz - their manager from the late ‘90s. The result is a new tour, which arrives here in Boston to play the Paradise Rock Club tonight, and a release of rarities on the Dangerbird label.

“I managed The Promise Ring in the late ‘90s and early 2000’s, and they broke up on the eve of Dangerbird becoming a record label,” says Castelaz on the Dangerbird website. “I never dreamed that the band would be an artist on my own label, and I couldn’t be more thrilled that they are now. It’s great to have them on the label they helped inspire.”

LINEUP - The resurrected band features what is being called their “classic lineup” of lead singer/guitarist Davey von Bohlen, drummer Dan Didier, guitarist Jason Gnewikow and bassist Scott Schoenbeck. They’re in the midst of a limited tour in the Midwest and on both coasts, giving fans a rare opportunity to see this influential band for the first time in over ten years.
BACKSTORY - The Promise Ring began as the side project of von Bohlen, guitarist/vocalist for Cap’n Jazz. They recorded three full-length albums and a handful of EPs for Jade Tree [], including the highly acclaimed and more pop-oriented ‘Very Emergency.’ They then signed with ANTI- Records for what would be their final release, ‘Wood/Water.’ Upon their split, they moved on to solo projects, such as von Bohlen and Didier’s band Maritime, and Schoenbeck as bassist for Dashboard Confessional.