New Music Video of Note
A Twisted Vision Brought to Life
We're not exactly sure which Apocalypse has befallen the world where motorcycle gangs rule the roost and people have to stitch up battle wounds by themselves under dark trees... Or where the opposition where skull-like white masks, but somebody has thought of it and here it is...

George Lewis Jr (aka Twin Shadow) conceived of the video himself and had this to say about its storyline and some would say dangerous stunts: "Well my mom is gonna be super bummed out, but yes that's me surfing my motorcycle in the video for '5 Seconds' ... and yes I'm also on the wrong side of the road. I figured if I was ever going to get away with being on a jackass on a motorcycle it would be for my own music video. The video for '5 Seconds' is one part of a series of videos based on a novel written by myself and a good friend Eric Green called 'Night Of The Silver Sun.'"

Motorcycles are a theme, evidently. Twin Shadow's "Ton Up" tour kicks off July 27th in Boston, MA. Advance tickets for the tour come with an exclusive tour t-shirt. To hear the offer and see all the dates, click the image below.. 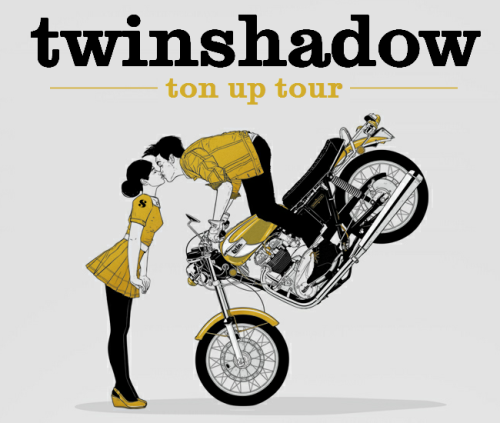