The Tallest Man On Earth - There’s No Leaving Now

THE BEST NEW MUSIC OF 2012 - Kristian Matsson has chosen the perfect stage name. Hear “the tallest man on earth” and what do you think of? Maybe mythic giants stepping over mountains, or early 20th century sideshow performers, or scrawny boys hopefully draining their milk glasses every morning. Listen to The Tallest Man On Earth and you feel transformed into any or all of these people. Thanks to Matsson’s yearning and triumphant voice, the dogged poetry he transmits with it, and the simple weave of his backing guitar, his songs can leave you looking down over an entire green countryside one minute and up at an unclimbable tree the next.
His newest album, There’s No Leaving Now, swoops you in and out of these viewpoints until they melt together; it rolls you gently down a grassy hill. Take first single “1904” – it heightens Matsson’s striving voice and upbeat strumming with a gleaming background melody, but all that reach is undercut by a paranoid story that doesn’t resolve into anything resembling hope until the very last lines – “at least something is alright with your thinking/’cause they shook the earth in 1904.”
New Album: "There's No Leaving Now" 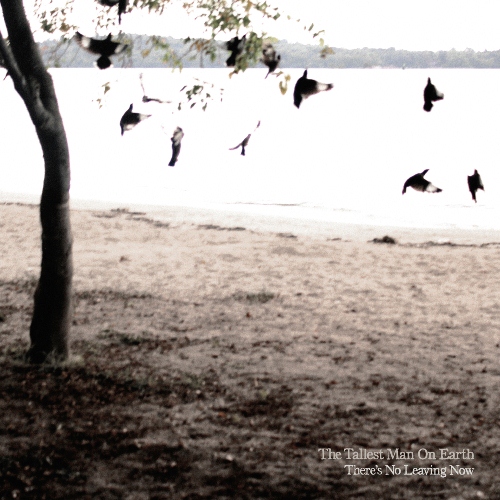 Now that it’s 2012, Mattson isn’t interested in shaking anything all that hard. As fits his all-natural aesthetic, The Tallest Man takes an “if it ain’t broke, don’t fix it” approach to music in general – he stands on the shoulders and hangs from the strings of even taller men. His voice is like a young Dylan’s with extra earnestness (check out “Criminals,” where it’s unusually and appealingly roguish), and his gorgeous fingerpicked guitar is straight out of an unwritten sequel to the Nick Drake songbook (as in “Leading Me Now,” which spins a beautiful guitar pattern out into a percussive gallop). In an era of purposeful and sometimes gimmicky attempts to “transcend” or “update” well-trodden genres, the fact that the Tallest Man, a folk musician, has pipered a loyal following without employing any blatant tricks speaks to his talent, and to his raw love of the tradition he’s gaining a footing in.


His focus on refinement over reinvention explains why There’s No Leaving Now departs very little from previous albums (Shallow Grave; The Wild Hunt) and recent EPs (The Tallest Man On Earth; Sometimes the Blues is Just a Passing Bird). It also makes his particular subtle strengths more evident. Matsson, who was born in Sweden and has told reporters that he’s “still mastering English,” nonetheless manages to fill his songs with surreal and evocative imagery and then refract it all into a bite of wisdom just in time for the chorus. Album highlight “Revelation Blues” has its narrator make excuses to a lover, invoking “fenced-up hours in fields of red,” “loveless straits,” and a “train of thought” made literal with “falling paint and broken gears,” before memorably explaining “I always want to bring you somethin’/but sometimes it’s just roses dying too young.” He also knows just when to interrupt his own smooth cadences and patterns, letting his guitars flow on a little too long over his voice at the end of “Revelation Blues,” and allowing himself a brief and devastating rhythmic hiccup in the middle of “Little Brother.” Occasional extra instrumentation (soft drums on “To Just Grow Away,” slide guitar smoking up “Bright Lanterns,” piano on the title track) add a few more colors to his earthy palette, but not enough to muddy it. A good thing, too – if it’s already the tallest, no need to overgrow.