A Closer Look
by Nick Parker
For years now, my mother and I have often had arguments about about the value of the music video. The point she always makes is one I can recall many people worrying about around the time that MTV launched. You remember: before MTV was dismantled, leaving us with an enduring obsession with seeing directors' visions of the songs we would have 'just' listened to before. Simple put, mum says, videos only distort and distract from the experience of immersion in music.

I've always felt this was unfair. As long as bands have some say in where things go, there is an opportunity for another aspect of a track to be revealed in a video. Sadly for me, today's release of Maximo Park's "Hips and Lips," from the album "The National Health," which is coming to us in June, seems to suggest (and not for the first time) that mothers' know best.

The video shows a young fan dancing around his bedroom, loaded with posters (and even, rather disconcertingly, blow-up dolls!) of the band. There is a small, predictable twist at the end of the video, but the whole thing is a tired example of the kind of thing ten thousand fans could, and sadly probably will, recreate in the cacophony of a web 2.0 world. It's not just that this is dull and lazy, but that it's extremely distracting and doesn't help us connect to this track.
Let me try to dislocate music from imagery then. Please try averting your eyes as you stream this video, and I will do the same. The song, which singer Paul Smith suggested on a FB post recently was actually about "a tempestuous relationship," has an odd juxtaposition of hard drums and keys, next to usually delicate vocals. Even when the whole band kicks in during the choruses, Smith is almost always singing at a whisper. It’s an effect that keeps me feeling usually attentive to what he's saying, which works very well given his past examples of lyrical excellence. It's actually a clever song then, both energetic and thoughtful, not that watching the video will allow many to appreciate that. 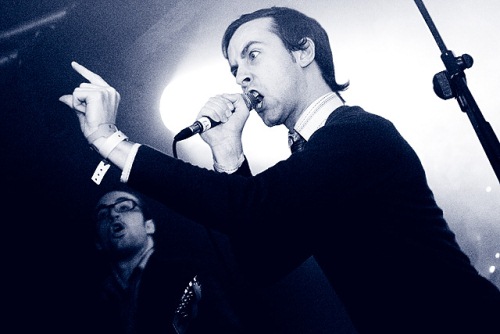 I still have high hopes that Maximo Park can deliver something special in "The National Health," but I'm frustrated that I'm forced to cling to that hope in spite of the band's best efforts to obfuscate very good music under inane imagery.