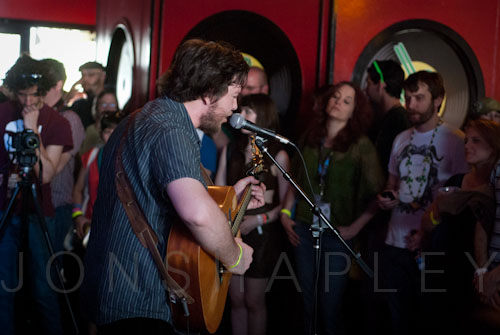 FIELD REPORT is the creation of Chris Porterfield, whose debut record is a collection of songs six years in the making. Chris cut his musical teeth with DeYarmond Edison (the other members of which were Justin Vernon and Megafaun). After their breakup in 2006, Bon Iver and Megafaun went on to success while Chris hung back in Wisconsin, thinking his career in music was probably over. It was really just beginning. For the first time in his life, he began writing his own songs, which he spent the following six years carefully perfecting. In December 2011, the record was finally committed to tape at Justin Vernon’s studio.

The results of those sessions, now celebrated in Rolling Stone and music blogs around the planet - is a haunting set of songs - both crafty and poignant. After sending a few unfinished tracks to select people, the response was immediate and impactful: producer Paul Kolderie (Radiohead, Warren Zevon, The Pixies, Uncle Tupelo) fell in love with them and offered to mix the record, which he did in February. You'll be able to own the music you're listening to this July.

The Outlaw Roadshow at SXSW 2012 was the world debut of Field Report, a set and a performance that laid the groundwork for this huge summer tour announcement and the year that lies! Come celebrate this music discovery with us!