Archers of Loaf at The Middle East

At the risk of seeming over-sentimental, I have to say I feel honored to have been at this rare and special family reunion. Archers of Loaf’s two-night-stand at The Middle East was one of just a few U.S. stops this year, and they brought along long-time friends Pipe, who also haven’t been around in quite some time. The crackling excitement in the room added to the magic. 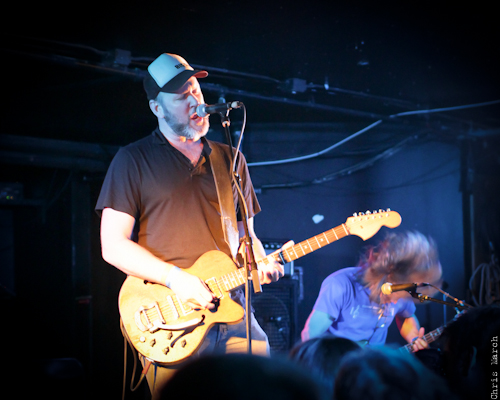 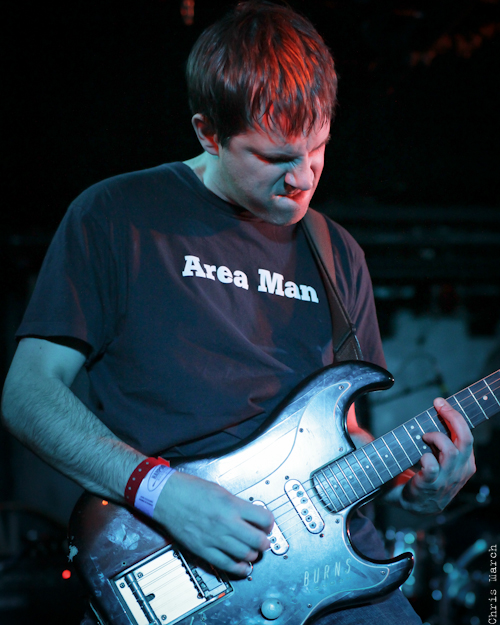 The last time Archers of Loaf were in Boston (or rather Cambridge), it was at this very spot (The Middle East), in October of 1998. From the look and sound of it, I’m guessing many of the same people were in attendance. It was a veritable love fest - frenzied, mosh-happy, limb-flailing, out-of-control love.

With glorious strummed and feedback-driven guitar dissonance, we’re led into a raucous version of “Audiowhore,” and from that moment on, band and audience were of one mind, delighting in and feeding off each other in a symbiotic relationship. Melodic cacophony poured off the stage in waves. The electric energy of frenzied moshing (a writhing single-celled amoeba during crowd favorites like “Web In Front”), ‘shout-alongs’ and the occasional crowd surf rolled back in. One woman who had flown in from Texas was in a state of uncontrolled delirium, bouncing around from one side of the stage to the other, and attempting to lick the neck of Eric’s guitar (she also grabbed the mic stand off the stage to request an encore over the PA). 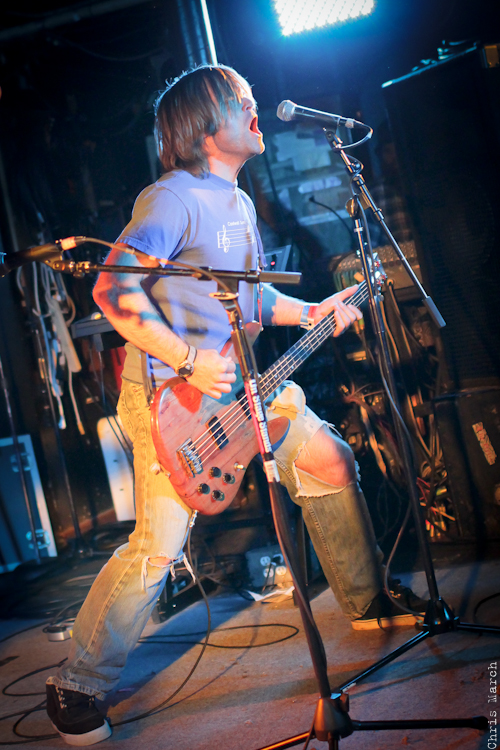 The band was possessed, especially bassist Matt Gentling, who careened around wildly like an unhinged madman, at times high-kicking like a Rockette. He provided completely irrelevant introductions to many of the songs, such as “Let the Loser Melt” (“Do any of you guys own like a small animal? Well, this song goes out to you guys.”). You could tell they really loved being there, and seeing Eric Bachmann with a big smile on his face several times throughout the evening was a good indicator that maybe, just maybe, they’ll be back, even after Merge finishes with those deluxe reissues. 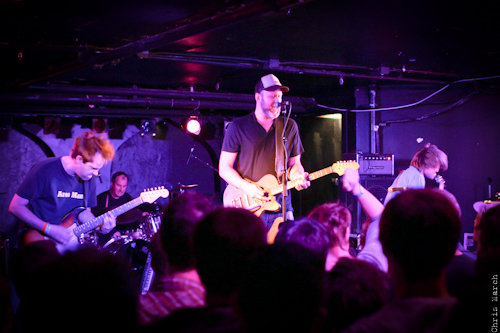 It was a nicely paced set. Songs like “Step into the Light,” slow and sprawling, were strategically placed between the more frantic, hard-driving stretches. There were poignant quieter moments (as in “Bacteria”) that felt like a coiled snake ready to strike, an absolutely beautiful version of “Dead Red Eyes,” and nice melodic introductions to songs like “Fabricoh.” 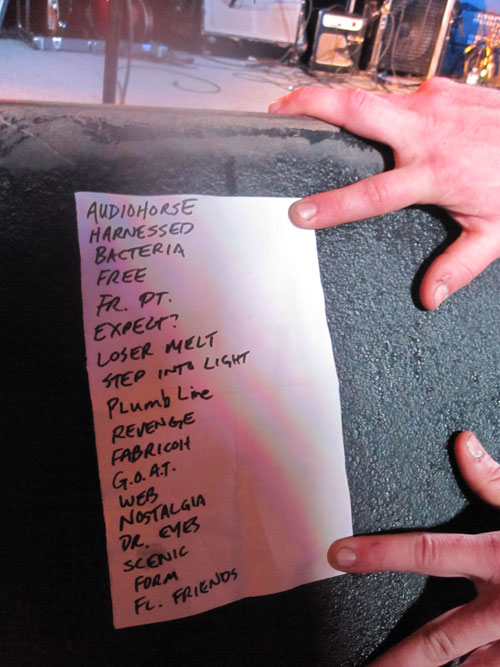 The albums were all represented (Vee Vee especially so), and it seemed like everyone got to hear their favorites. The beautiful “You and Me,” was played in the encore, perhaps in response to the polite request from some gentleman in the audience, “YOU AND FUCKING ME!!” “White Trash Heroes” had an emotional, sadly nostalgic feel, and was a nice close to a perfect evening. 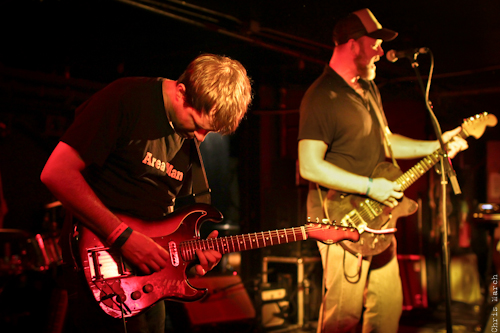 The revelation of the evening was fellow Chapel Hill band, Pipe. They were active in the '90s, and these days, they all have day jobs, though with occasional one –off “resurrections.” But from the second they hit the stage, they launched into their hard-driving punk fury like they’d never left. In fact, from the first song, it was as if they were mid-set circa 1976 at CBGBs. 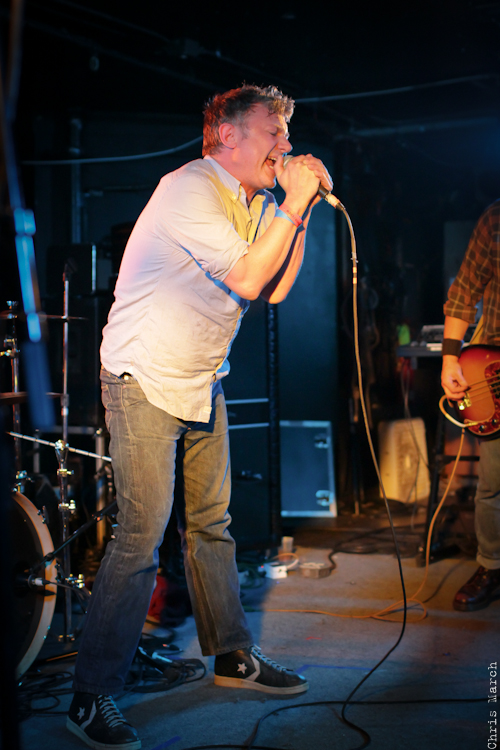 Lead singer Ron Liberti came out wearing a sedate button-down red sweater, looking for all the world like Mr. Rodgers, and getting mercilessly teased about it by the raucous (and clearly devout) audience. He kicked things off with a quick warm-up of jumping jacks and straight into wailing vocals, with the band tightly wound and ridiculously hyper charged, spinning like a psychotic top. Between Liberti’s acerbic banter and crazed, seizure-like movements; and the band’s furious pace, which once or twice slowed to a deliciously dangerous sprawl, and at other times erupted into screeching guitar solos, I instantly fell in love.

Easily and without reservation, I put them in the same class as the Stooges, MC5, Sex Pistols, et al. Best-kept secret, but clearly not for this crowd, who a few songs in, were already yelling out for their favorites, and who had an ongoing conversation with Liberti throughout the set. One hardcore fan in the front said he’d seen them 15 years ago, last time they played here (with another legendary band of the Chapel Hill scene, Polvo). It was a glorious homecoming. 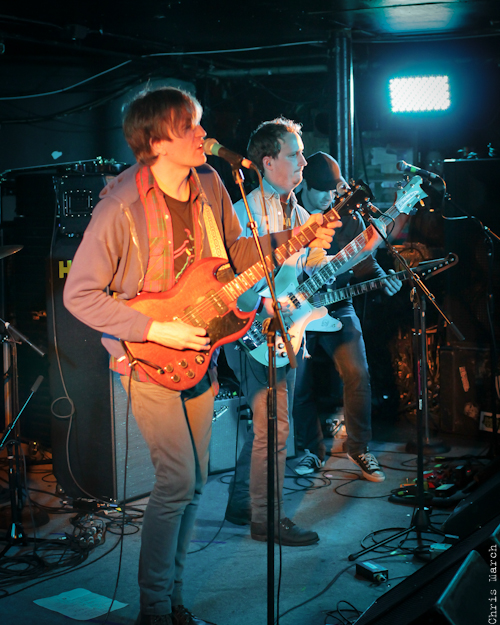 The good news: your band is asked to open for the legendary Archers of Loaf at the Middle East Downstairs. The bad news: you’re the first band to go on at 8:45 p.m., two hours before the headliner, and you’re playing for about 20 people. But despite the small audience, Austin-based Hundred Visions ripped right into their set of full-on thrashy and danceable garage rock, peppered with occasional 3-part vocal harmonies and tastefully nimble solos from their dual guitars.
Though they finished on a strong note with a heart-pumper, the highlight of their set was “Last Cab from Tunis,” funky and spacey, like Talking Heads with a psychedelic Eno-esque vibe. Not that there’s anything wrong with a solid garage rock sound, but this one took the band to a different place altogether, and showed impressive sophistication from a band that only has a 3-song EP thus far (their debut full length is recorded and due out in September).