Live Impressions
by Cara Giaimo
Photography
by 5342 Studios
Rock N’ Roll Rumble
Night 3 - April 3rd, 2012 at
TT the Bear’s Place
As the Red Line rumbled towards night 3 of the Rumble, I wondered what Boston had in store for us this time... Sunday night found TT’s basking in the surf-shoegaze of Endless Wave, the red light district disco of Cooling Towers, and the catchy truck stop rock of that night’s champions, The Rationales. On Monday night, Thick Shakes brought the organ-dipped garage punk, Animal Talk riled up the crowd with their pop rock, Grey Valley Ghosts shone with youthful energy and winners Garvy J exuded professionalism.
By Tuesday, many of the attendees were out for their third night in a row. Some of the shine had worn off and been replaced by serious focus. Contingents of devoted fans, uniformed in band t-shirts and genre-appropriate hairstyles, rushed to the front and danced like the judges were watching when their band of choice took the stage. There were no more yo-yos, there was no more free candy... 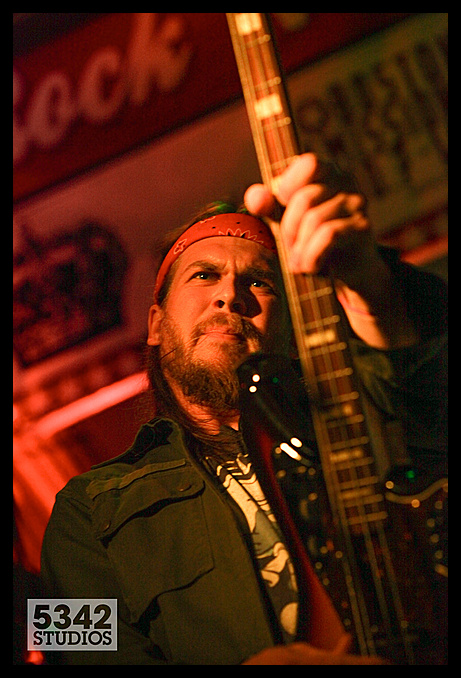 There were four bands worth fighting for. I had checked out the music video for opening act The Susan Constant’s single “Came/Went” before coming to the show, and the video’s quirky 90s toys and twisting clay shapes prepared me for the band’s offbeat vibe and complex song structures. But I was charmed sideways by their energy, particularly that of frontman Paul Sennot. His bespectacled, boyish face likely garners him lots of Buddy Holly comparisons when he’s standing still, but as soon as he gets warmed up, and the veins start jumping out of his neck, those comparisons probably stop. His voice has the nasally intensity of all the great passion-plagued nerds (John Darnielle, Ben Gibbard, Dan Bejar), and it’s a watertight vessel for his clever lyrics.
The Susan Constant 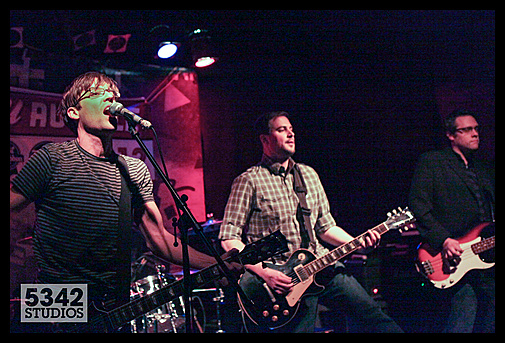 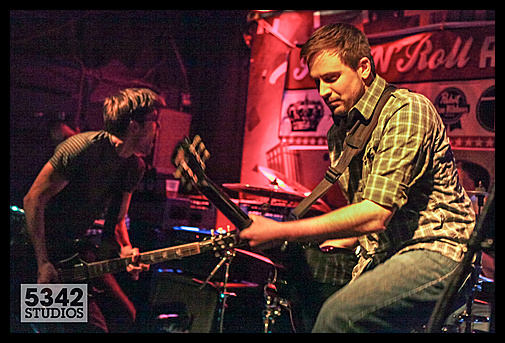 The rest of the band navigated the shifts within and between songs like geese in a perfect V, constantly relinquishing the spotlight to make room for each other – drummer Jason Rossman left the rhythmic heavy lifting to bassist Mark Veligor on power ballad “Dress So Well,” but then tied together set-closer “Myths and Makers” with a killer syncopated beat. All this – combined with the fact that they’ve made their album available for free online – might explain why The Susan Constant had the most diverse group of fans. A gray-haired man next to me and a teenage girl at stage right played air guitar with equal vigor the whole time.
The Susan Constant
facebook / twitter / bandcamp

Anyone trying to play accurate air guitar along with The Tin Thistles likely needed an IV halfway through their set. The self-described “token punk band” from Somerville earned that title before playing a single note – after emcee Angelle Wood introduced them by warning them “not to bust any heads tonight,” they immediately laid down the law and demonstrated their intent by throwing out a championship belt into the crowd! Then they played a barreling set of straight-up brawly punk songs. Guitarist Allen McRae made throat-slashing movements in between measures, as though trying to fight back his own unstoppable riffs.
Tin Thistles 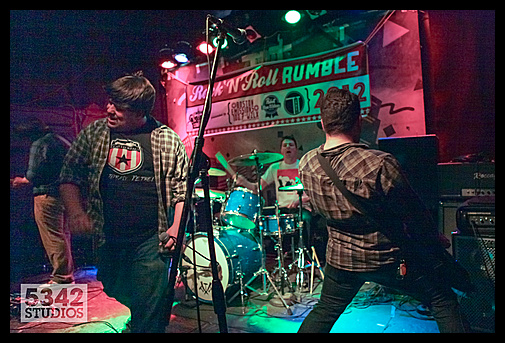 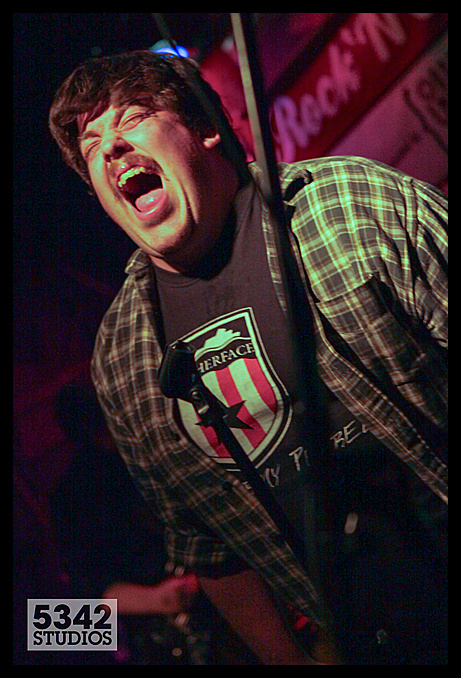 It didn’t matter when frontman Bil Callahan lost his microphone – he ripped through his syllables loud enough without one, and the crowd helped him out (at one point, he even pulled someone out of it to cameo on a Misfits cover). Drummer Arthur Bergevin pounded the skins with his mouth open, possibly to keep from cracking a tooth on his own sound waves. They did all this while careening off each other like ice in a glass, and inspired several bouts of spontaneous wrestling in the audience – I actually saw one guy artfully ripping the sleeves of his friends new Tin Thistles t-shirt with his teeth. Fitting tribute for a band that rocked the whole crowd’s faces off (and nearly broke one completely).
Tin Thistles
facebook / twitter / bandcamp
I kept squinting to try and figure out whether Ghosts of Jupiter were packing an unusually large bass drum. I never could make up my mind, but they certainly had a big enough sound – bluesy, funky, and psychedelic all at once, like if a Led Zeppelin caught fire with some Grateful Dead bears inside of it. Someone near me remarked that they “skewed a little too close to their influences,” but it’s hard to deny the power of certain rock clichés, and the Ghosts weren’t afraid to unleash surprisingly ethereal harmonies or mine a bass-synth solo for maximum groove power. They also had no qualms about dressing the part, decked out in dreadlocks, shredded vests, and thousand-yard stares.
Ghosts of Jupiter 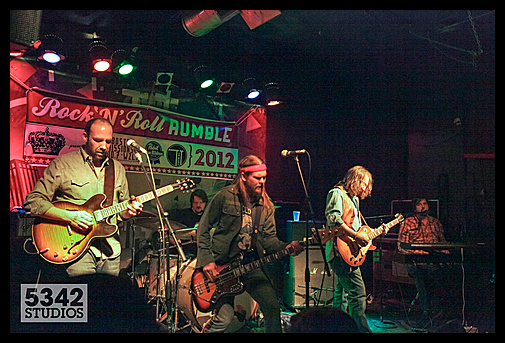 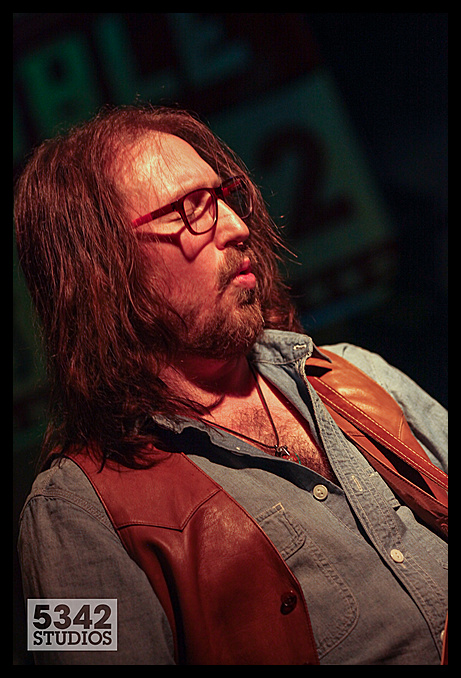 They backed it all up with undeniable chops – when guitarist Johnny Trama unleashed a solo, it was a real event, not just posturing, and when the whole band collaborated on the riff at the center of “Trample On Daisies,” I found myself worrying about the building’s structural integrity. Everyone was dancing by the end of their set, and the band was rewarded with the third night’s Rumble crown. Sometimes you just need a dose of pure pentatonic.
Ghosts of Jupiter
facebook / twitter / bandcamp
The five-piece Letterday came from “right around the corner” to round out the night with a set of tight and dynamic and emotively driven songs. Frontman Antonio Cinelli immediately whipped the crowd into a frenzy of clapping, and never let the energy flag, leading his band through older originals, material from their new EP, and a Get Up Kids cover with equal enthusiasm.
Letterday 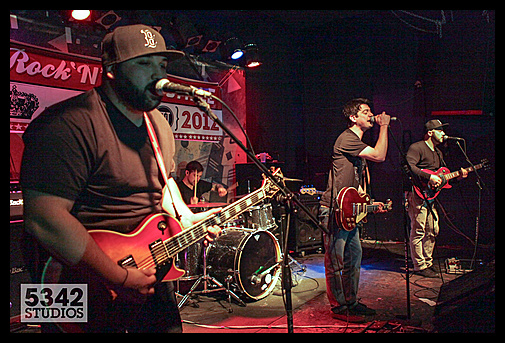 Pat Politano spiced up the songs with snappy and intricate drumming, while guitarist Chad Boudreau soaked his sound in equal parts pathos and uplift. Before releasing everyone into the night, they pulled out all the stops. “That girl you’ve been talking to all night . . . you’ve been waiting to make a move, right? Do it now! Before she walks out the door!” ordered Cinelli, before launching into “Don’t Go,” a bona fide prom-ender. Even if no one left the show with a date, I know at least one writer walked out with four new bands on her mind. 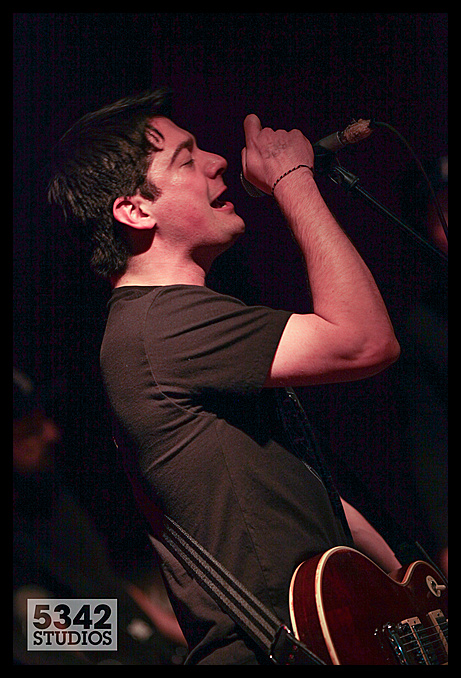