Live Impressions
by Ryan Spaulding
Photos
by Kira Doucette
Rock N’ Roll Rumble
Night 6 - April 7th, 2012 -
at TT the Bear’s Place
The End of the Beginning of the 2012 Rumble arrived with the onset of Preliminary Night Six. And this lineup - hosted on the only Saturday night of the Rumble, looked to be the loudest and most raucous of the entire affair. As it turned out this was the only predictable element of the entire night..
Motherboar won - powered by the loudest set of the week 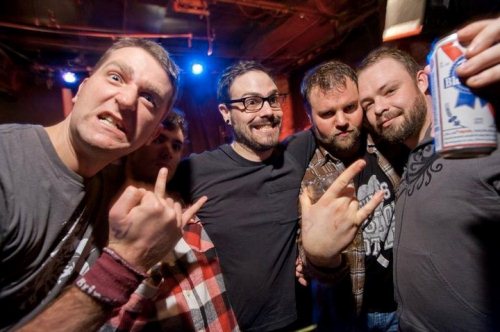 On the outside looking in the night offered us one of the best girl-powered rock and performance acts in the region with The Grinds. (We just saw them on New Years and they kicked serious ass.) We knew to expect epic hard rock from underground favorite metal-heads Motherboar and then there was Streight Angular - musicians known as much for their ability to throw down in a party situation as they did musically. (Interestingly, Both of those areas -music and networking- have earned Streight Angular significant gains the last year. They are a band on the rise.) The real wild card for this attendee was Sherman Burns. I had never heard them play a lick before and with all the music still ringing in my ears from SxSW and the week preceding from this year's Rumble - I hadn't had the opportunity to have a listen. (The band's mock publicity shots in Bill Cosby / Grandma sweaters I intuitively suspected was a joke or a ruse..) We were all in for a surprise! This was a night to remember... 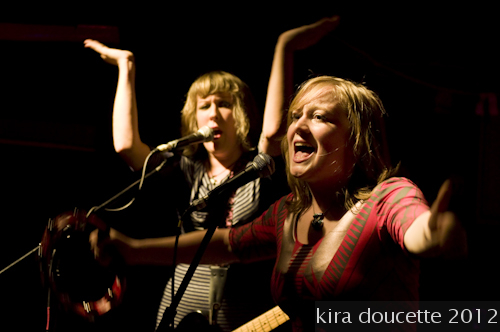 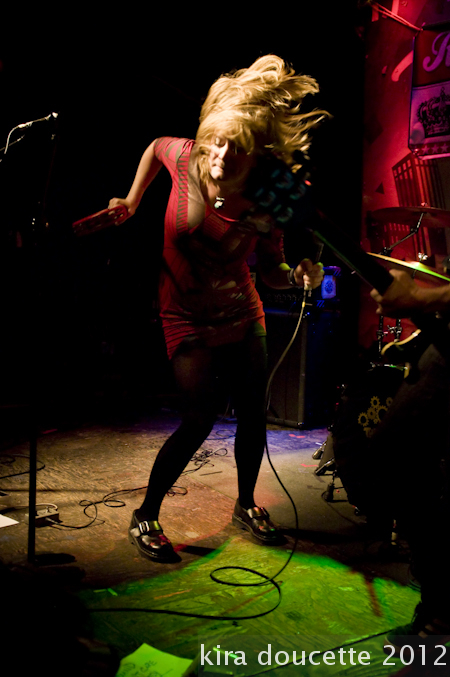 On any other night this could have been the loudest set - the guitar was wild, the vocals loud and the drums, pounding. Probably the most rounded act, The Grinds played a huge night of music. They sounded even better than they did the last time I saw them -- and that's all you can ask of any Rumble band... leaving it all out on stage! 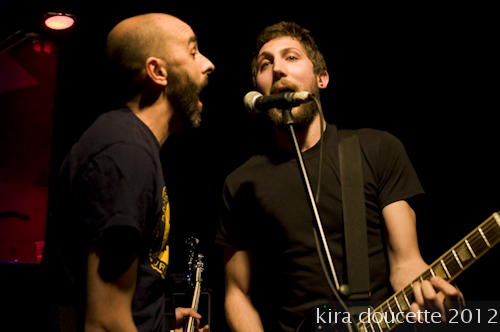 Whoooa! Sherman Burns. You play loud, progressive metal. Evidently a lot of people in the room (many of them clad in black t-shirts, attending to see Motherboar, and who also never seen Sherman Burns) turned to catch what looked to be the pinnacle of volume for the night. Grinding, trudging, the band climbed through a series of guitar solos and strong progressions to reach a series of cathartic heights - before bringing it all back down. Regardless of what becomes of this Rumble - Sherman Burns will end up being one of the winners as they stole the hearts of many attending Motherboar fans - and the respect of the judges...
Sherman Burns 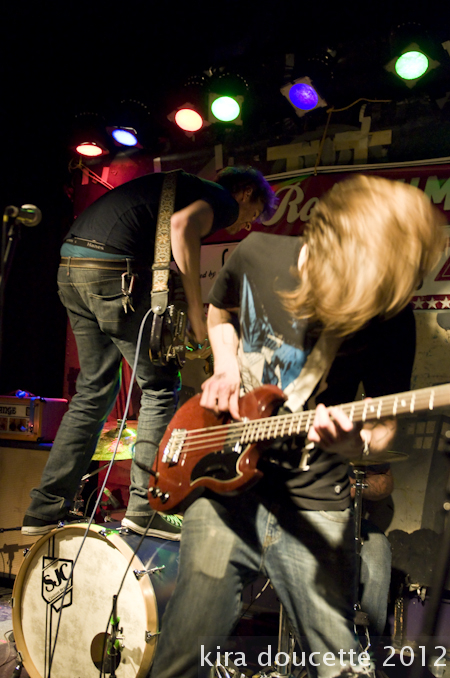 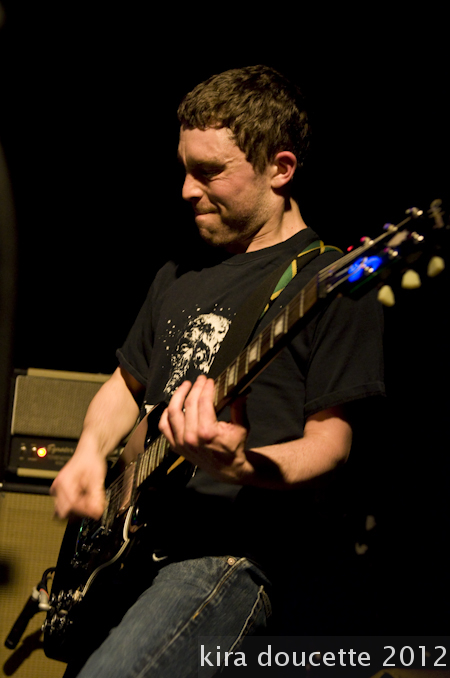 Two things were very clear from the get-go... Motherboar were determined to be the loudest set of the night and the week (they were) and that they were confident of their ability to win. They filled the room with their fans and that kind of enthusiasm is hugely contagious. The guitar and drum frenzy spilled out across the night. Everybody on the block new Motherboar was playing. If you dig metal kids, this is your ticket.. 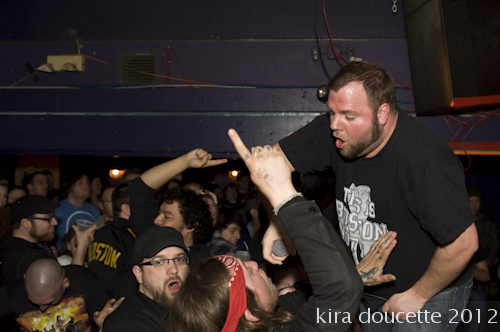 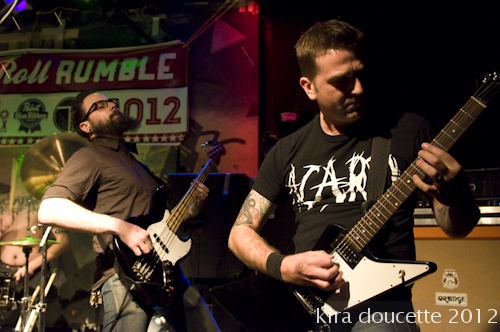 Motherboar
facebook / twitter / bandcamp
The biggest shift in the room we saw all week long happened then. All the black t-shirts and sweaty metal kids vacated the front of the room and left for the bar. Hipsters and cool kids crowded to the front (this was a real changing over of the room) as Streight Angular set up. Right away it was difficult not to take note of the neon colors and face paint. I called Streight Angular a "party band" at the start of this piece and it's a most apt description. Slowly the members took the stage, one-by-one, adding the elements of music they were responsible for as they joined. Where was Al Polk?
Polk, the singer/ring leader of the band - and probably the wildest SOB we've met in years, was nowhere to be found. The room was dark and the lights on stage were glowing to match the face paint as Al Polk took the stage. The room was full of excitement and the band broke into song. There was a lot of exuberance and yelling as friends of the band joined the stage and tossed out beads and light sticks. Streight Angular is kind of interactive theater.. And this was a wild way to end another epic night of Rumble madness!
Al Polk of Streight Angular 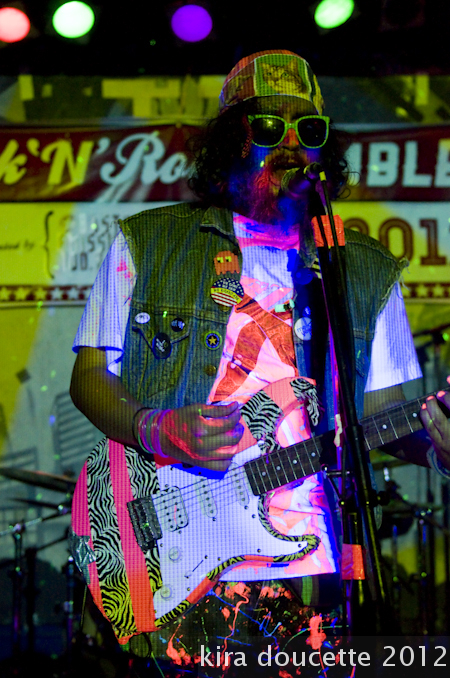 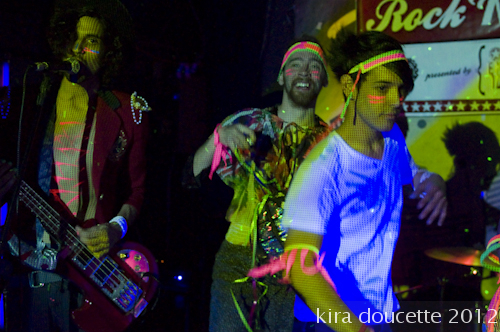 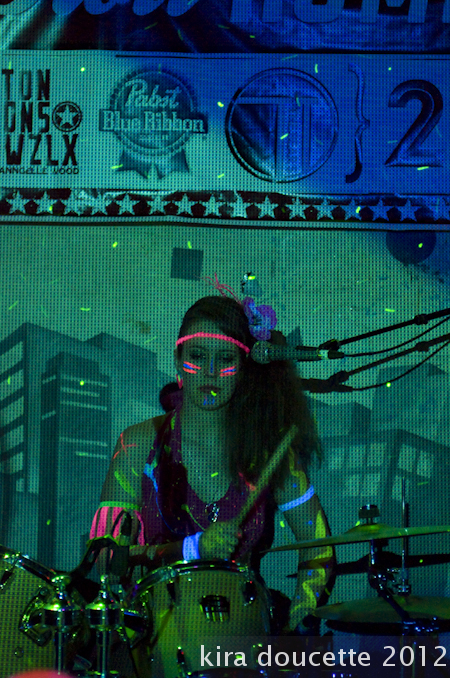