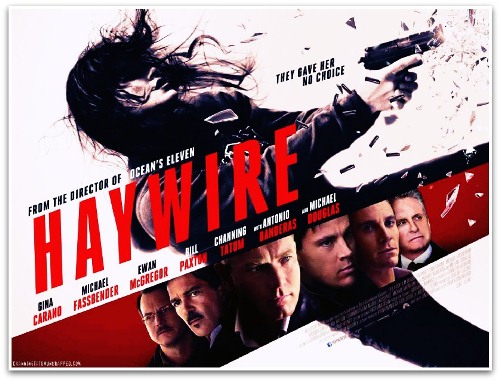 I have a serious bone to pick with the folks behind Haywire. First, let’s start with flagrant false advertising. At what point, exactly, does anything in this film go haywire? Amiss might be more appropriate, or maybe Unsettled. Things never come close to the "haywire" worthy level of craziness.

In this formulaic action film, Gina Carano takes on the role of Mallory Kane, a member of an unnamed company that the government hires for covert operations. Carano’s a retired mixed martial arts fighter of no small repute, switching roles from a career of kicking the crap out of people to a movie where she......well, kicks the crap out of people. Play to your strengths, I guess.
Following the rescue of a kidnapped journalist, Carano’s sent on an assignment that her boss Kenneth (Ewan McGregor) promises will be simple and carefree - like a vacation. She’s partnered with Paul (Michael Fassbender), a British special agent, posing as his wife on a mission we’re never really let in on. Mallory later finds the corpse of the journalist she rescued, and realizes the jig is up. Paul jumps her, and the two brawl it out before she finally shoots him in the head. Are all vacations like this? Mallory learns that she was set up by her very own employer, and sets out on a mission of vengeance against her boss and the agents he worked with. Why she isn’t immediately arrested for all this at the movie’s conclusion, I will never know. Guess you get a jail out of free card if they’re vengeance killings. 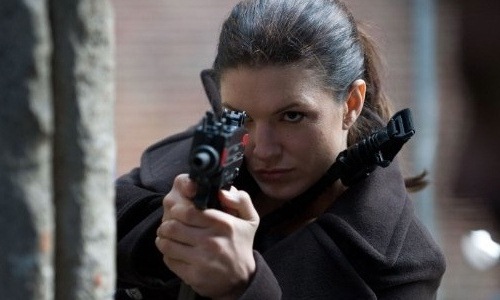 Remember the part about this being formulaic? That’s because I’ve seen this story a hundred times. I know, I know, "there are no more new stories," but there seems to be no real attempt to make this even a little unique. I suppose the writers and director went with the “less is more” mentality–less plot, less dialogue and less music, hoping the throw-downs would carry the day. Not so, I’m afraid. There are entire scenes that pass in utter silence, and when the music does play, it’s the same recycled James Bond tracks again and again. The dialogue is a joke, but the punch line comes from the cast. They read it like it’s an early-morning dress rehearsal, with barely any emotion or desire that they want to be there.

Big Names Add Little Heft - The film features an all-star cast, including Michael Douglas, Bill Paxton and Antonio Banderas, but it seems they’re just there to sell the movie to audiences - balancing out actress Carono’s relative inexperience on the big screen. Unfortunately, they bring little to the table in the film. I will give the leading lady some credit, though not much–though her acting was far from memorable, she does show some chops, and I’d be curious to see what she can do with some more credits under her belt.

Cinematography - The film was directed by Steven Soderbergh, who has a pretty unique cinematic style. The shots are incredibly clean, with very little background noise, colors or extras to distract us from the cast. Which would be fine if they were enjoyable to watch. Sorry to say, I’d rather hear what the Asian couple in Dublin (in one particular scene) were talking about as Kane evades her pursuers -- than follow the protagonist plotline. 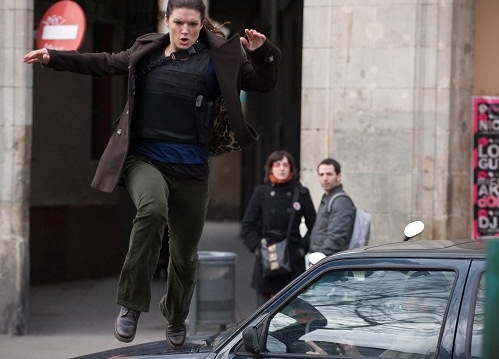 The sole saving grace of this letdown? The fight scenes. Soderbergh’s style comes in very handy here, as we get to see each brutal kick and punch in perfect clarity as Kane racks up a hefty body count. They’re well choreographed, creative, and give her the chance to show us all why she’s known as the “Face of Woman’s MMA.” Each one stand apart in different ways, and in the world of ass-kickery, Haywire gets a thumbs-up. But fight scenes simply aren't enough to save the overall cinematic experience here.