In Performance Arts
by Julie Stoller

Arts in and Around Boston - The Vermont-based, internationally recognized Bread and Puppet Theatre troupe are satirical observers and merry pranksters. Founded in 1963 by Peter Schumann on New York City’s Lower East Side, and one of the oldest non-profit, self-supporting theatrical companies in the country, they have long been outspoken activists and purveyors of leftist politics and street theatre, balancing serious messages with playful whimsy, satire, and really big puppets. They now return to the Boston Center for the Arts for the sixth year in a row.
Their earliest shows in New York spoke of “rents, rats, police,” and other problems of their neighborhood. They were frequent participants at anti-war rallies in the ‘60s and ‘70s, organized block-long processions that involved hundreds of people, and became a symbol of American “activist pacifism,” delighting and educating their audiences.

The Bread and Puppet Theatre’s weeklong Winter Residency at The Boston Center For The Arts will take place from January 23rd through January 29th. The BCA is located at 539 Tremont Street. Tickets are just $12 for most shows.

Over the years - Bread and Puppets' performances have become more complex; a melding of sculpture, music, dance, slapstick, and language. They feature giant puppets made of paper maché and cardboard, a brass band for accompaniment, and anti-elitist dance, expressionism, dark humor, and low culture. Most of their shows are morality plays – Shakespeare for the modern age?

Offerings - Matinee and evening performances will include local volunteers and musicians, such as Somerville-based Second Line Social Aid & Pleasure Society (Bread and Puppet’s Boston ‘house band’ and hosts of HONK!). Evening performances feature an informal Q&A and their traditional post show sharing of Schumann’s famous sourdough rye bread with garlic aioli. It is symbolic of community spirit, connectedness, and their belief that “art should be as basic to life as bread.” 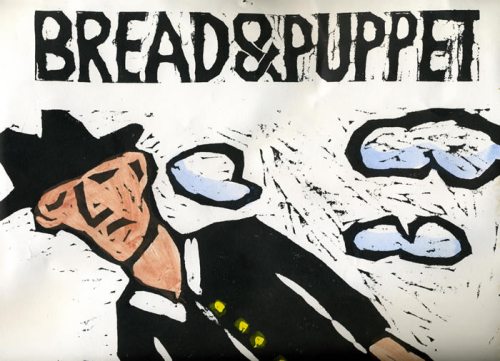 Boston Center For The Arts / Bread and Puppet

Ian Thal said…
"Most of their shows are morality plays – Shakespeare for the modern age?"

Actually, by Shakespeare's time, morality plays were considered pretty old-fashioned-- and you have to have a keen eye to see what Shakespeare owes to them.

That said, I really don't know if we want a return of the morality play-- they were often used to justify some pretty horrible stuff.
16.1.12