Mister Heavenly - Out of Love

Mister Heavenly - Bronx Sniper from Ravenhouse LTD.
An Introduction to A Sound - The opening lines of “Bronx Sniper”…lulled in by a whisper, and then the boom hits you. That sets the tone of OUT OF LOVE, the “doom wop” offering by indie-rock super-group Mister Heavenly. As unique a sound as I’ve heard in a while, the group consists of Ryan “Honus Honus” Kattner (Man Man), Nicholas Thorburn (The Unicorns, Islands) and Joe Plummer (The Shins, Modest Mouse) and incorporates elements of doo-wop with modern “alternative” music. 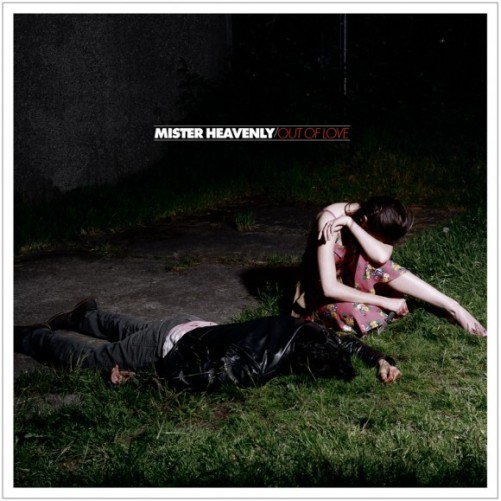 The songs here are short and sweet. In fact, most of them are around three minutes or less, and only one song, “Reggae Pie” is longer than four minutes. In the tradition of the doo-wop genre, they tend to stick to the theme of love, odd and quirky love, but love none-the-less.
The first track, the aforementioned “Bronx Sniper,” marches along to a stalking, foot-stomping beat, illustrating the story of a rogue gunman cutting people down in the NYC borough. It’s a heavy, heart-wrenching anthem that manages to convey a story in surprisingly few words, with lines like “This heart’s a stranger and you love it cause it’s dangerous like yours.”
The mood immediately shifts as “I Am A Hologram” follows, a lighter, upbeat song about…well, a hologram, lamenting his condition as nothing more than an illusion of light. It’s clever and fun and propelled by Kattner’s piano playing.
Mister Heavenly at SxSW 2011

One of the more interesting tracks is the quirky “Pineapple Girl” which I understand to be a song about Sarah York, who as a young girl wrote a letter to Manuel Noriega, and became friends with the Panamanian dictator.
“Pineapple Girl,” along with delightfully dark “Diddy Eyes” and “Your Girl,” are prime examples of the back and forth singing between Kattner and Thorburn, each one with a distinct, but complimentary style.
Probably my favorite track on the album is “Charlyne,” a toe-tapping, shoulder-shaking love song. The melody is bright and buoyant, accented by a playful guitar lead and backing vocals that best represent the classic doo-wop sound the band borrows from.
Mister Heavenly
Web / Fb / Tw / My
on Sub-Pop

The Verdict - Overall, the album is consistently good, even if the better songs are loaded at the top of the track-list. The problem with many of these “super-groups” is the songwriting lags a bit, but Mister Heavenly manages to weave together layered and interesting arrangements and clever, well-thought out lyrics. Definitely a standout record for 2011.