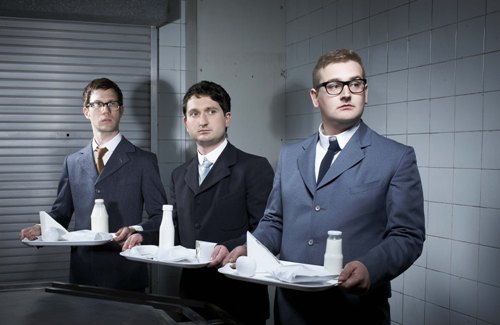 YOUNG KNIVES
DATELINE: the UK - In the never-ending struggle between the sullen and the amusing in English music, Young Knives last album, Superabundance (2008), was firmly in the latter camp. Along with several other notable examples of what might be called the 'party-band' genre – Art Brut, The Wombats and Los Campesinos (and I suppose the Arctic Monkeys too) – The Young Knives sought not only to be fun but actually funny. Eddie Argos' wit has kept Art Brut steaming along for some years now for example, and Los Campesinos, though showing a more thoughtful side with their last album, are still a band that can make you smile in spite of yourself.
Ornaments from the Silver Arcade, the new album from Young Knives, is clearly still determined to be energizing and cheerful in just this way. They are even more sweetly digestible too, generating, almost throughout, a comfortably round and bubbly, bass-driven sound. It's a very polished album, with a pace consistent enough to allow even the most dour-minded listeners like me to feel they might be persuaded to dance. 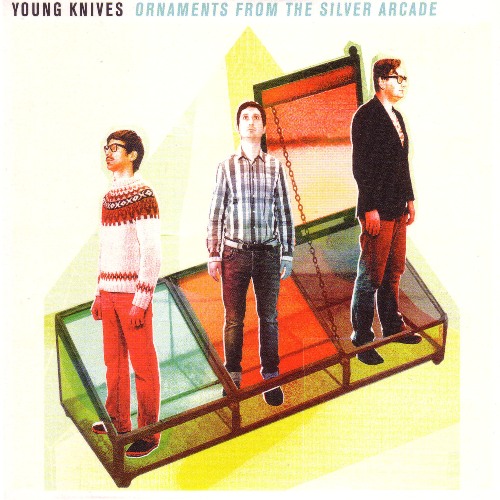 Young Knives - Human Again
NEW SONG!
The Sounds of Things... - I recently got into an argument about this kind of music, which is built so much on idiosyncratic witticisms that it can fall very flat when the jokes don't seem to translate. It's true that, just like in the case of the Arctic's, you sometimes need a fairly particular vocabulary to notice the gags as they roll by – they are promoting a very UK notion of themselves, which sometimes has a hard time settling in this country. The extremely nerdy image Young Knives promote should be one signpost that the band are similarly outside some common ideas about the rock-stars persona.

VERDICT: BUY IT - I have to admit that, compared to Superabundance, Young Knives may be just a bit past peak with this new album. The songs retain their energy, but not always their sparkle. There are some surprises on Ornaments though. "Storm Clouds" for example, builds to something (much) heavier than anything I heard them do before. Overall though, this band has made another really fun, if not groundbreaking, album, that is well worth checking out.

[Editor's Note: Let's flashback to 2008, when RSL names Young Knives' Superabundance one of the 20 Best Albums of the Year. It's worth a listen and at just 20 LPs this entire list, if nothing else, is super-digestible. - Ryan Spaulding]
Young Knives
Web / Fb / My / Tw