Who is Roy Sludge?

Record Release Tonight
Someone You Need to Know
TT the Bear's Place
Central Square Cambridge
tickets at the door, $10 - no fees
featuring Movers & Shakers
Tony the Bookie and Unholy Trio 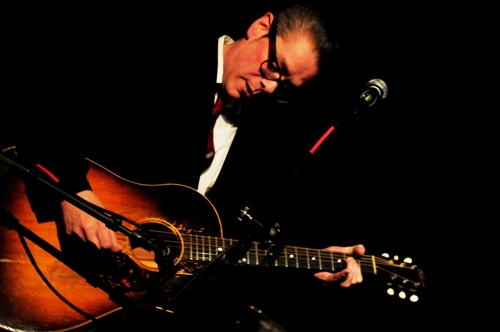 A BEST OF 2011 ALBUM SELECTION - Some thirty-plus years in the making, country-tinged rockabilly punk legend Roy Sludge releases his debut album this evening in Cambridge. For the unfamiliar, and let's face it - most of you are new to the name Roy Sludge, there is a decent chance that the deep-voice talent has entertained you in some way if you have frequented Boston area shows over the years.
THE MAN BEHIND THE SOUND - Sludge cut his teeth in the Boston music scene in the late 70's. In the 80's he helped form the original Barrence Whitfield and the Savages and Noise Pencil (later the Turbines), sharing the stage with the Del Fuegos, the Blasters and Mission of Burma. The 90's saw the formation of local cowpunk legends the Country Bumpkins with Rich Gilbert and Western Swing supergroup the Spurs. in 2000 you can hear Sludge's keyboards on the Mighty Mighty Bosstones "Pay Attention" . Forming the theremin lounge act the Electric Logs saw him nominated for Boston Music Awards. As a member of the Tarbox Ramblers Sludge recorded with the legendary Memphis producer Jim Dickinson. As the decade came to an end there wasn't a beer hall or juke joint in the area that didn't star roots acts, L'il Memphis or the Coachmen both led by Mr Sludge.
There are so many good things to say about this album but I will start here: this is the record Mr. Sludge so obviously wanted to make. A first effort album that celebrates the country he listened to as a boy. What Sludge and his band bring to the fore is really something quite special. He is one of most dynamic-sounding frontman in New England (hands down there kids - nobody sounds like Roy Sludge) he also brings a trademark Memphis-style rockabilly flourish that rounds out the songs on "Too Drunk To Truck."
Roy Sludge - King Of The Open Road
NEW! Released Tonight!

Celebrated throughout, in true country-western form, is the elevation of the blue collar hero. Instead of hiding behind the persona of his songs, Sludge celebrates the thinking process of the Everyman in the the room. This is exceptional roots music - completely grounded and human, all at once. I think Johnny Cash himself wouldn't mind putting on this album on a hot summer night. This is the kind of country/roots album that fans of all genres can get into as well. It's a testament to Roy's passion and the execution on this winning effort.
The new record will be available for download on itunes and all credible online sites, at Newbury Comics locations and of course at the CD release show tonight. No plans? FACEBOOK EVENT PAGE This is going to be incredible - you should go.

Anonymous said…
I've sen this guy in Boston for years and he is the best, buy the record or go see him opening for Peter Wolf either way I guarantee you'll like it!!
21.9.11