Tonight in Boston
By Julie Stoller
Bank of America Pavilion
Some tickets still available:
$32-45.50 including fees


If ever two bands lent themselves so perfectly to a large outdoor amphitheatre
setting for a full-on, festive, end-of-summer blowout, it's TV On The Radio and Broken Social Scene. What both share in common is consummate musicianship and a Really Big Sound that is certain to fill the air of Boston Harbor with song tonight. 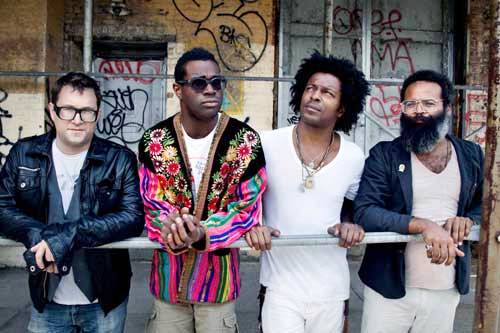 TV On The Radio - "Will Do"
For Brooklyn, NY-based TV On The Radio, this ambitious musical project centers around the duo of vocalist Tunde Adebimpe and multi-instrumentalist/producer Dave Sitek, who first came together in 2001. After taking a hiatus in 2009 to work on solo projects, they reformed earlier this year to work on their fifth full-length album, Nine Types of Light (released in April on Interscope). Themes of love and longing are examined, marking a departure from previous projects, but what hasn't changed is their seamless transition from classic rap and free jazz influences, slick electronics, punk rambunctiousness, some very funky soul singing, and a heart-pumping horn section.They're refreshingly unique, energizing and exuberant.
The album was released with an hour-long "movie" that featured videos for each song, interspersed with interviews from various New Yorkers on a wide range of philosophical topics. As a collaboration with friends and favorite filmmakers, it illustrates a wider reach and view, musically and intellectually, as the band continues to experiment and grow.

Joining TVOTR this evening are Broken Social Scene, who most recently were melting ears at the FYF Festival in Los Angeles this past holiday weekend. The Toronto-based musical collective began in 1999 with Kevin Drew and Brendan Canning, and over the years has grown to include at times as many as 19 musicians. Expansive and orchestral, their lush sound has featured guitars, violins, horns, woodwinds, and guest vocalists that have included Emily Haines of Metric, Leslie Feist, and Amy Millan, though since 2005, Lisa Lobsinger has been their primary vocalist. Albums have included film scores and two solo works from Drew and Canning, and live shows feature a rotating cast of musicians, based upon availability.

Broken Social Scene
Their most recent release was the award-winning Forgiveness Rock Record (May 2010, Arts & Crafts) and also Lo-Fi For The Dividing Nights, a more experimental album of soundscapes recorded in the evenings after their main sessions. The sounds of both are signature BSS though...

Anonymous said…
I'm going to the show in Philly and was curious to hear how long Broken Social Scene's set was. Did anyone play before them?
8.9.11