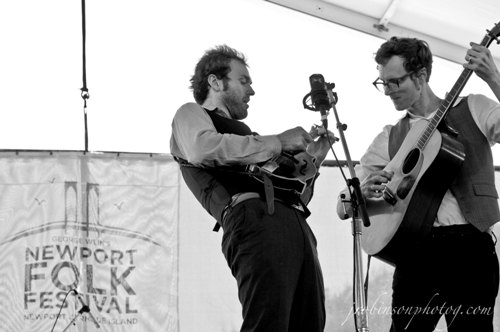 A FAVORITE SET AT NEWPORT - Bluegrass was on the menu during mandolin virtuoso Chris Thile and guitarist Michael Daves' outstanding set this year. The pair of skilled technicians successfully try their hand at bluegrass on Sleep with One Eye Open, the new album recorded at Jack White's Third Man Studio in Nashville. Based on what we saw and heard here, this will be one sought after record in the days & weeks ahead... An unexpected ace in the Newport Folk hand this year! - RYAN SPAULDING

INSPIRED SOUNDS - Thile and Daves began with a jamming guitar and mandolin-picking instrumental, amazing and delighting the audience with their mind-bending licks and winning them over with their goofy between-song banter, which added to their immense charm. They introduced “one of the very few bluegrass songs about New York City..” and asked if anyone sailed up from NY (and if they could hitch a ride back). “Folks, this next song encompasses the width and breadth of bluegrass emotion in only its title, which is ‘Loneliness AND Desperation.’”

Their set featured some absolutely phenomenal bluegrass pickin’ and perfectly harmonizing vocals. That these guys are so young and so damn good is quite astonishing. Especially mind-blowing in sheer virtuosity was “The Tennessee Blues,” which led into the Louvin Brothers’ “You’re Running Wild.” Their crazy exuberance remained high through their hour-long, breathless set. After introducing a gospel number, a little improv. followed with "All My Ex's Live in Texas" ("that wasn't the gospel song"). These guys are a two-man jamboree... so much fun. - JULIE STOLLER

Sleep with One Eye Open

My Little Girl in Tennessee

Man in the Middle