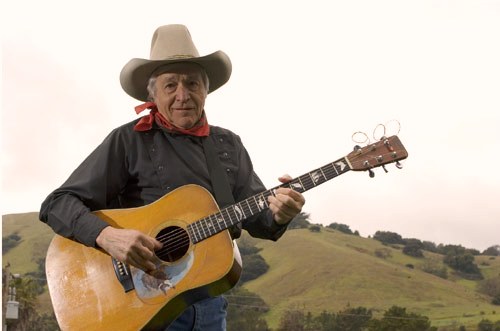 A Celebration in Music - One of the elder statesmen of the American folk singer and storyteller tradition, Ramblin' Jack Elliott (born Elliot Charles Adnopoz) has been introducing audiences to traditional country, blues, bluegrass and folk songs for over 50 years.

His latest album, A Stranger Here (Anti/Epitaph, 2009), which includes songs by Leadbelly, Mississippi John Hurt, Big Bill Broonzy and others, won a Grammy Award for Best Traditional Blues. He first learned to play guitar from a rodeo cowboy, after running away from his Brooklyn, NY home, not to join the circus, but to become a rodeo star. Fortunately for us, he discovered music instead, and went on to become great friends with his mentor Woody Guthrie.


A Newport Folk Birthday: Ramblin' Jack Elliott celebrates his 80th birthday on August 1, and continues to win over new fans with his down-to-earth, engaging manner.