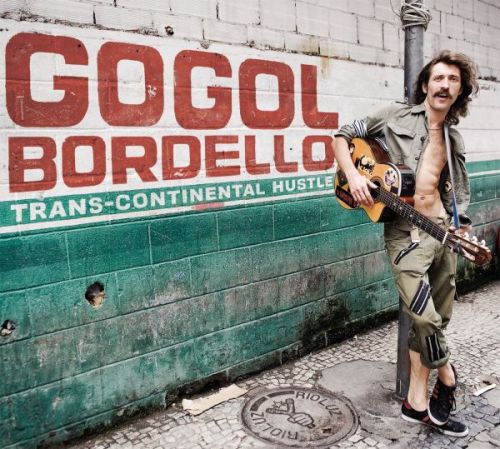 WHO THEY ARE / BACKGROUND - In a sea of amazing performers gracing this year’ s Newport Folk Festival, near the top of the list has to be the gypsy-punk-Ukrainian communal celebration of Gogol Bordello. They’ll be toning down their usual over-the-top madness for a more serene and classy-as-hell acoustic set appropriate for Newport, and is the ideal showcase for their subtle nuances of their music. They’re soulful and straight-from-the-heart, with accordion and violin giving them their distinct Eastern European flavor, and lead vocalist Eugene Hütz engaging and completely riveting. The band is a melting pot of cultures and influences – Russia, Ethiopia, the Ukraine, Ecuador, Scotland, and the U.S. – and if there’ s any doubt as to their universal message and appeal, have a look at that tour schedule! If you’re at the festival this year, do not miss these guys. - Julie Stoller
I want to place today's artist profile in perspective: Eugene Hütz is considered by many to be the World's premiere Gypsy performer. The witty, spastic Hütz has been wildly successful at charming away the hearts of his rabidly loyal fans around the world. He is the face of his band: Gogol Bordello - a multi-cultural extravaganza of a band that has come to personify for many, the hybrid sound of Modern Gypsy. This could be the most fun set of the entire Newport weekend. I will be up front. [For more about Gogol Bordello's colorful past, check this link] - Ryan Spaulding