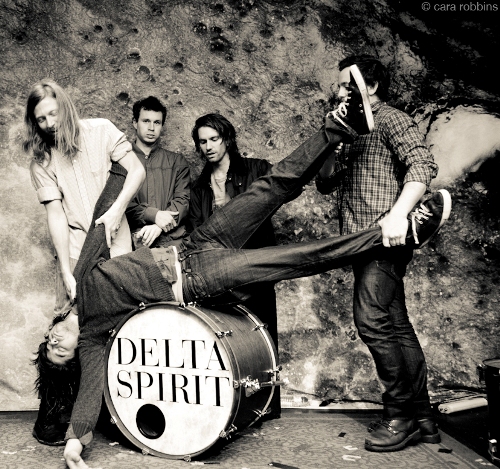 WHO THEY ARE / BACKGROUND - Those of you out there (like me) who are quite fond of Delta Spirit’ s folk-Americana sound and Matt Vasquez’ s traditional yet timely storytelling will probably want to put their set at Newport on your “ must do” list. During an April interview back in April, members of the band spoke about writing songs for their next album, with the plan to begin recording in June or July. They mentioned that they’d like to get away from the folk-Americana scene (and media pigeonholing) into more straight-ahead rock ‘ n’ roll (“ the slow jams will be more like Montell Jordan than Neil Young” ). With that and a stated interest in hip-hop, the 90s, and ‘ progressive production’ , there’s just no telling what may be in store. For their Newport appearance, however, I’ll wager they’ ll roll out their beloved classics such as “ Children” , “ Strange Vine,” and “ People, Turn Around.” Of course, they’ ll add some gems from their brilliant album of last year, History From Below. But maybe, just maybe, we’ ll get to hear a first taste of that new album. - Julie Stoller

"Since 2007, this has been my favorite band in America. Delta Spirit are storytellers and while they may speak of resenting their lot in life from time-to-time, they tell their tales better than anyone else out there. I have seen them play and sipped whiskey with them many times. If you get great music; if you understand heartache and the frenzy of love... If you can understand the human condition with all of its foibles and still want more - then you can begin to truly appreciate this band. Delta Spirit are an emotional lightning rod - just incredible," - Ryan Spaulding
July 30 - Newport Folk - Sold Out
Aug 02 - The Pageant w/My Morning Jacket - St. Louis, MO
Aug 03 - Uptown Theater w/My Morning Jacket - Kansas City, MO
Aug 05 - Aug 07 - Lollapalooza - Chicago, IL
Aug 19 - Aug 20 - SoundTown Music Festival - Sommerset, WI
Sep 16 - Austin City Limits Music Festival - Austin, TX