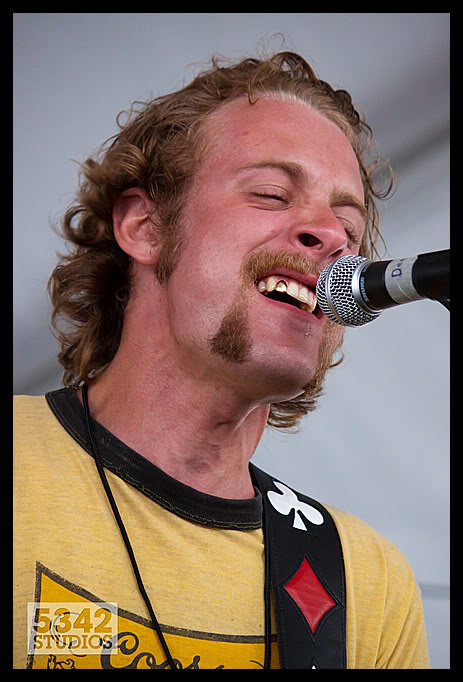 Deer Tick - Twenty Miles
2 SECRET SHOWS - Deer Tick's guitarist, vocalist and chief songwriter John McCauley sings less like a mid-20s indie rocker, and more like a 60-something folk troubador. The alt-country style of their music is well-suited to his gravelly vocals and the weary world view of an old soul. The loneliness, the regrets, the self-loathing... "Raindrops like bullets on my fragile skin; insecurities I've had, I keep them within." - 20 Miles. This is from their latest album, "The Black Dirt Sessions", which features guitarist Ian O'Neil (formerly of Titus Andronicus), who joined the band in the summer of 2008. While their recorded music tends to be thoughtful and introspective, their live shows can be raucous, wild affairs. - Julie Stoller

McCauley was already slated to play the Folk Festival in an official capacity as a member (with Matt from Delta Spirit and Taylor of Dawes) of Middle Brother - perhaps, if not likely, the greatest indie folk supergroup. Their appearance at the festival is rumored to perhaps be their last run together as a group. Deer Tick, Delta Spirit and Dawes will soldier on...
RSL STREAMING PHOTO ALBUM
Deer Tick at Newport Folk Festival 2009

photos by 5342 Studios
Deer Tick & Friends
Newport, RI this weekend
The Newport Blues Cafe...
Friday at 8pm / $10
Saturday at 10:30pm / $10
All proceeds will go to benefit
the Newport Festivals Foundation.

Ryan Spaulding said…
A third show for Sunday evening has been added. You can see if tickets are still available for any of the shows by checking the Newport Blues Cafe website
30.7.11