One to Watch: EULA 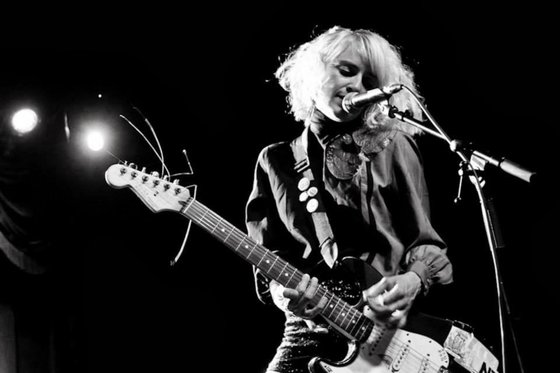 OUR INTRODUCTION - When we first heard EULA, at the recent B.O.M.B.fest in Hartford CT, we were impressed by the size of their sound, given they are only a three-piece, and play sparingly simple dirty guitar-punk songs. There recently released album, "Maurice Narcisse," turn out to show this kind of addictive sound in abundance, and lots more good stuff besides.

Their video for Texas Stampede is a good track for them to promote, not only because it's energetic and fun, but also because it typifies lots of the interesting things about this band.

Singer Alyse Lamb screeches "Where were you?" discordantly before the song bursts into a racing punk hook. Another highpoint of the album is "Honor Killer," which shows the band's rather unusual song construction, and the furious overdriven bass tone they commonly use.

EULA ARE ONE TO WATCH - Given their bounding energy, it's a refreshing surprise when, later on in the album in particular, EULA steadily change the direction of "Maurice Narcisse." First they introduce the rather more 'sunny' (in tone if not in subject) "Wake Up," and then slow things down considerably with "Canyon," as song that is more than just filler, but which instead sounds like a quite different band, only recognizable by the persistent dissonance we've heard elsewhere on this album.
This twist in the trajectory of the album concludes with an acoustic song, "Hollow Cave" that demonstrates a depth you might not expect from a band that repeatedly project their feverish punk-pop credentials. Note the poignancy of lyrics like "Knowing it’s the final time/ I'll lay awake by your side," and you'll realize "Maurice Narcisse," and EULA in general, are well worth checking out.
EULA
Web / Fb / My / Blog / Tw